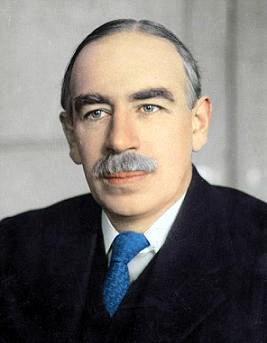 New York, May 8 (UP) –
John Maynard Keynes, noted British economist and adviser to the Bank of England, warned that the United States today that its economy “could not function at all on the present basis” if Adolf Hitler wins the war.

The effect on this country’s financial position on the event of an Axis victory, he said, “doesn’t bear thinking about.”

Mr. Keynes arrived on the Atlantic Clipper as a representative of Sir Kingsley Wood, British Chancellor of the Exchequer, to study problems raised by the Lend-Lease Act. He said he would confer with Sir Frederic Phillips, Undersecretary of the British Treasury, now in this country, and hoped to see his “friend,” President Roosevelt.

Mr. Keynes said Germany has been able to prevent inflation, that Great Britain was making successful steps in that direction, and that the United States would have to undertake regulations to that end.

Germany has stopped it dead and we have stopped it largely. The price rises we have had have been largely due to increased import costs. Germany, since it has no imports, has not had that problem.

I have no doubt that you can, with similar regulations, stop it here. It’s a thing you must do.

One anti-inflation measure in Britain, he said, was a post-office compulsory savings plan, and another was higher taxes generally.

Beginning this year, every worker will have their income tax deducted by his employer from his pay.

There was a good deal of wonder over how the wonders would take this. We discovered that 75% of them said they preferred it. They like the pay-as-you-go theory. They didn’t like it as first. The main thing is they got used to it. That is the keynote of democracy – getting used to it.