The Japanese civilian population that was interned, were they just from the West Coast, or from all over the continental US?

Judging by the news reports I have transcribed or am transcribing from 1942, most of the internment occurred in the West, though there were a few FBI raids on people suspected of espionage among the Japanese and/or Americans of Japanese descent in the East.

Italians and Germans were more concerning in the East (especially the latter).

Welcome to the forums! 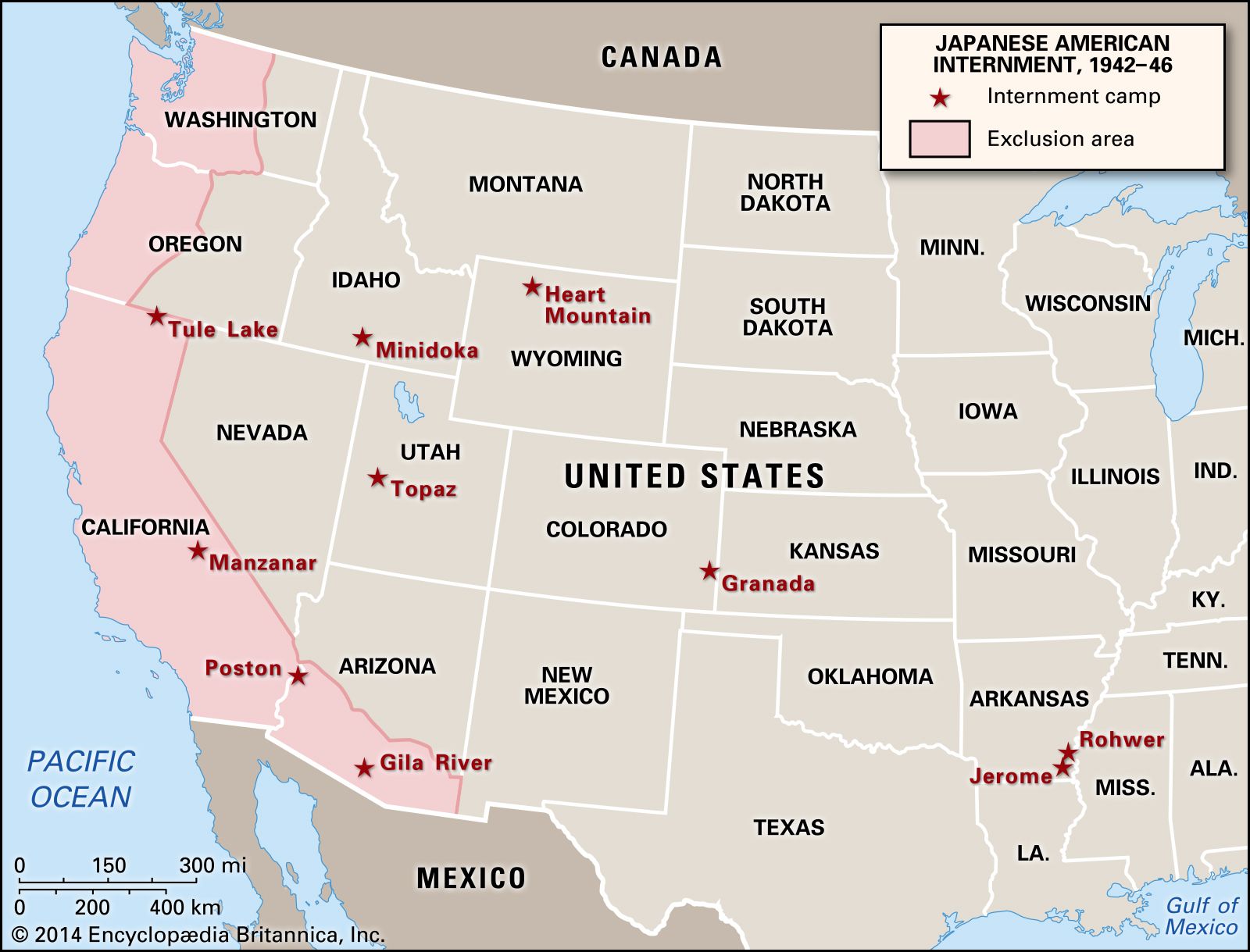 Japanese American internment, the forced relocation by the U.S. government of thousands of Japanese Americans to detention camps during World War II. Between 1942 and 1945, a total of 10 camps were opened, holding approximately 120,000 Japanese...

Only the West coast states were marked as exclusion zones for “Japanese Americans”. And it is interesting that the Eastern most internment camps were in Arkansas.

Arkansas was neither receptive to nor supportive of the Japanese Americans being incarcerated in the state. Local residents were often hostile to those imprisoned in the camps for reasons beyond the race of the internees. The camps often had amenities that were lacking in the poor, Delta towns that surrounded them: electricity, locally grown food, and more. During their period of confinement, many unfounded and malicious accusations of “coddling,” food hoarding, labor strikes, and disloyalty were aimed at the camps by state political leaders. Governor Homer Adkins and others also resented and feared the Japanese American prisoners. On February 13, 1943, the Arkansas state legislature passed the Alien Land Act “to prohibit any Japanese, citizen or alien, from purchasing or owning land in Arkansas.” This act was later ruled unconstitutional, and after the camps closed, several families remained in Arkansas, though all but one (that of Sam Yada) left within a year’s time to escape the system of peonage that was common for agricultural workers. Governor Adkins was particularly opposed to letting Japanese Americans attend college within the state, fearing that allowing such would pave the way to the integration of higher education in Arkansas. All Arkansas colleges turned away Japanese Americans save the University of the Ozarks in Clarksville (Johnson County), which allowed one Nisei male to enroll in the autumn of 1945, as the war was coming to a close.

I wanted to highlight this passage. I find it important to note that the creation of these camps nurtured long lasting hate in States that were not concerned by this ethnic group before.

I see the picture. Very similar to our present situation in Europe and US with refuguees and immigration. We, as humans, are naturally afraid of the different and the unnown, and we are sceptical that newcommers can be as loyal as we think we are ourselves.

We need to find common values, and I guess that why former enemies often becomes friends. There are no hatred to a person you know, and even less soldier to soldier. The were both just sent to war to do a job for their country.

Sorry for the late reply, Thank you for the info, much detail that i was not aware of.
Jim