Is it me or TIK doesn't understand the holocaust/argue in bad faith?

When thinking about is arguments regarding the holocaust, I think he doesn’t understand why negationnist law were put in place because, to him, they’re part of a marxist narrative as the marxist can’t explain the holocaust (and they control the academia too for TIK https://old.reddit.com/r/badhistory/comments/catwmf/on_tiks_demonisation_of_academia_and_his/ ). He doesn’t seem to understand holocaust denier as well and argue that if nazi germanny was a free market, then a company would need to own the holocaust for it to happen, when the nazi didn’t need that to carry it out, a free market nazi germany can still use the wehrmacht, SS and einsatzgruppen to carry the holocaust out, no need for a private business to own it for it to happen in a free market nazi germany. Didn’t liked that he said that if you don’t think hitler’s socialist, you’re denying the holocaust (discussing a regime ideology doesn’t mean denying its crime) https://old.reddit.com/r/badhistory/comments/nyjjpd/denying_that_the_nazis_were_socialist_makes_you_a/

To what, exactly, do you refer? Or is this just another “TIK bad!” tirade?

I don’t recall TIK ever being against negationist laws. And, he’s certainly not a holocaust denier. Where did you get that impression? What, from his warnings about the ideas and practices that lead to and/or helped with the Holocaust?

“He argues in bad faith!” Are you sure? From where I’m standing, using sources to back up your stance isn’t arguing in bad faith. In fact, calling him a moron without even watching his videos, dismissing what Hitler himself and his cohorts said and did (because he’s Hitler) and using r/badhistory to shield yourself from criticism (as if Reddit in general isn’t already shady enough) is more like arguing in bad faith than anything TIK ever did.

Either that or not understanding his points and spouting off tirades rather than proper counterarguments, like the guys TIK talked about here: 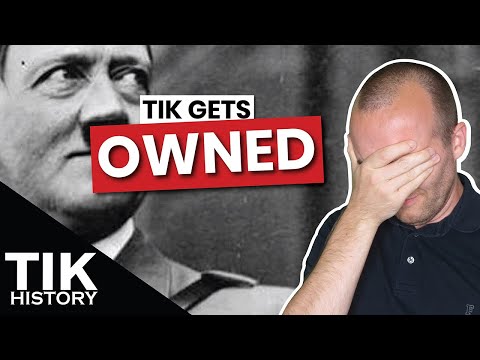 In fairness, TIK’s presentation isn’t always the best. He’s a bit of an absolutist and his style can grate on you. Personally, I think he needs a better script doctor.

But socialism in all its flavors, and collectivism as a whole, needs to be pointed out. Socialists know what they are saying, even if the masses do not. As a result, we have a whole swath of useful idiot thieves supporting fellow travelers, at best. Or, true believers who are masking their incrementalism, at worst. Now you can debate semantics all you want, but you can’t deny that the ideology is rotten to the core.

What TIK means when he says “To deny Hitler’s socialism is to deny the Holocaust”, if one weighs his overall opinions on the matter, I think it’s clear he means:

To deny the economic factors that lead to and facilitated the Holocaust is to deny that it was done by a human, and thereby distance yourself from the one doing it by assuming it was an act of insanity by a monster.

they control the academia

Oh, sweet naïve child. You have no idea how much academia has been infiltrated by ideologues to the point of absurdity. Explains a lot of the statue-toppling nonsense as of late.

Anything and anyone not fitting their perceptions of the “good left” is dismissed as a bunch of nutters.

Speaking of Reddit, r/enoughsandersspam is a better party to join in on leftist topics. You ought to check it out.

uh what, the nazi aren’t socialist, the state owning company or controlling the economy isn’t socialism, if it is then every government in this world is socialist, that’s the biggest problem with this definition, it’s so large it’s useless, and I think TIK argument already suffer from it. The holocaust was motivated by the nazi belief in racism, conspiracy theories and antisemitism, it would’ve happen no matter if they were socialist or not, again debating a regime ideology doesn’t mean denying its crime. Denying the economics factor doesn’t mean denying it was done by a human and I’ll say it, it’s not sane to comit something like the holocaust, the holocaust is why they’re see as monsters and it show how bad human can be when they want to. I don’t think using source mean the argument is going to be good. A issue with using mein kampf to prove hitler is socialist is that he lied in his book, so he’s already not trustworthy, same with the nazis themselves, they lied and a lot of their “socialism” was more rhetorical/for propaganda purpose than anything else so cherrypicking their quote isn’t good either,heck the “I’m socialist” quote isn’t from hitler, it’s strasser (remember? the lad wing that got purge?), I’m guessing you won’t want to read r/askhistorian thread if I send them because to you it’s worst than TIK so I won’t do tthat.

TIK is an unabashed advocate of Austrian Economics. It informs all of his videos and it’s why I find him unwatchable.

TIK peddles the ‘Road to Serfdom’ tropes that have absolutely no relevance to any analysis of the Third Reich.

A more profitable line of inquiry is to recognize that time 9eriid was the high water mark of trade unions, conglomerates, corporatism and syndicalism in most countries wide, the United States especially.

I define the third reich economy, not as socialist or capitalist but a mess that was going to fail, the nazi economy miracle being a myth. Another issue I have with the way TIK talk about marxism is that I don’t think going full conspiracy and demonising academia by saying their being control by marxist or that negationnist law were put in place because marxist can’t explain the holocaust will engage them and the rest of his leftwing audience to change their POV/debate . I don’t think he know why the law gayssot was put in place in france per example https://www.reseau-canope.fr/fileadmin/user_upload/user_upload/questions_vives_legislation_negationnisme.pdf

Although, the exact same can be said of building statues to honor people who lost a terrible war in the first place. So it goes both ways.

For anyone as confused in this conversation as I am, I am going to refer to a TG between two wars video made some time ago

I would say watch TIK’s video on the subject, but it seems to me that many in TimeGhost don’t want to.

Even if you disagree with TIK, even if you think that the Keynesian school is the only true way, then it helps to at least watch him to go through his arguments to form counterarguments. Don’t try to simply rely on emotion in an attempt to distance Nazism from socialism.

As an example, I didn’t argue against TimeGhost’s U.S. Army video without at least watching it:

But, sadly, I predict that conversations on anything relating to TIK won’t go anywhere in this forum.

I am not familiar with this school of thought. What is it about?

Keynesian Economics is an economic theory of total spending in the economy and its effects on output and inflation developed by John Maynard Keynes.

Thing is, I’m not doing it out of emotion, the nazi weren’t socialist and TIK argument still has issues that I think undermine his crediblity (and again, I don’t think attacking leftwing like he did will make them want to change their POV, I think he could’ve done it with a better approach and maybe use other definition of capitalism and socialism than just control of the economy/free market or the individual/group prism, that’d been an interesting exercice)

I find TIK quite interesting, but very like watching the mirror image of presentations by a Marxist ideolog. Everything is explained in terms of the ideology and every problem is the result of failure to follow the true faith.