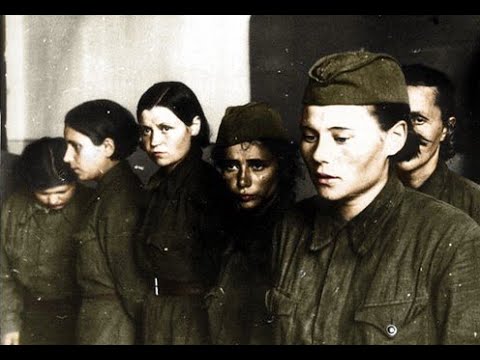 A fascinating video with great original film-thanks for posting.

Yeah and horrible beyond belief by also the German Wehrmacht as per usual behaviour at the time.

For me the big eye-opener is that Vera the Russian friend of my grandmother only was still alive in the camp because she was a doctor… My grandmother did risk her life by hiding her in the shelter. The shelters were forbidden for what they called “untermenschen” as Slavic people were seen as a “lower life form”. Completely ludicrous thinking.

This was also the reason my grandmother spoke reasonably good Russian.

Interesting info Chew-thanks for sharing. The concept of grooming a culture to view others as sub human is horrifying-let alone with ambitious and temporarily successful goals of the Nazis.

I’ve mention time and again-the eastern front had to have been perhaps the closest thing to hell on this earth.

I’ve mention time and again-the eastern front had to have been perhaps the closest thing to hell on this earth.

Yeah, I am getting the feeling that when I thought I saw the worst of the Nazi more even more hypersadistic revelations are just around the corner. Murdering female soldiers, when sending children to the deathcamps allowing only 1 parent to join the transport to make the trip extra miserable :-(. As for forcing children to be sent to the countryside, sounds human except for the part that the parents HAD no option to keep them and some of these kid ended up as child soldiers (cannon fodder).

And the main horror, especially in the East, it was not some renegade traumatized maniac but standard operations. People were allowed not to participate like in SS Police Battalions and get different jobs but still the majority became the infamous willing executioners!