I DARE SAY —
……
Xerxes and Leonidas
……
By Florence Fisher Parry

1941 A.D. – Hitler’s own Elite Bodyguard is being thrown against the Greeks with terrific loss of life. Mt. Olympus has been taken, and the Nazi hordes are sweeping upon the Plains of Thessaly where southward, near the Aegean Sea, Thermopylae waits for them.

480 B.C. – Xerxes’ own bodyguard, 10,000 Persians called “The Immortals,” were thrown against the Greeks with terrific loss of life. For three days, Leonidas, the Spartan King, and his 300 men held the pass at Thermopylae. On the third day, Leonidas was slain, but the fight went on only the more fiercely over his body, until the few remaining Spartans fell under the arrows and javelins of the foe. 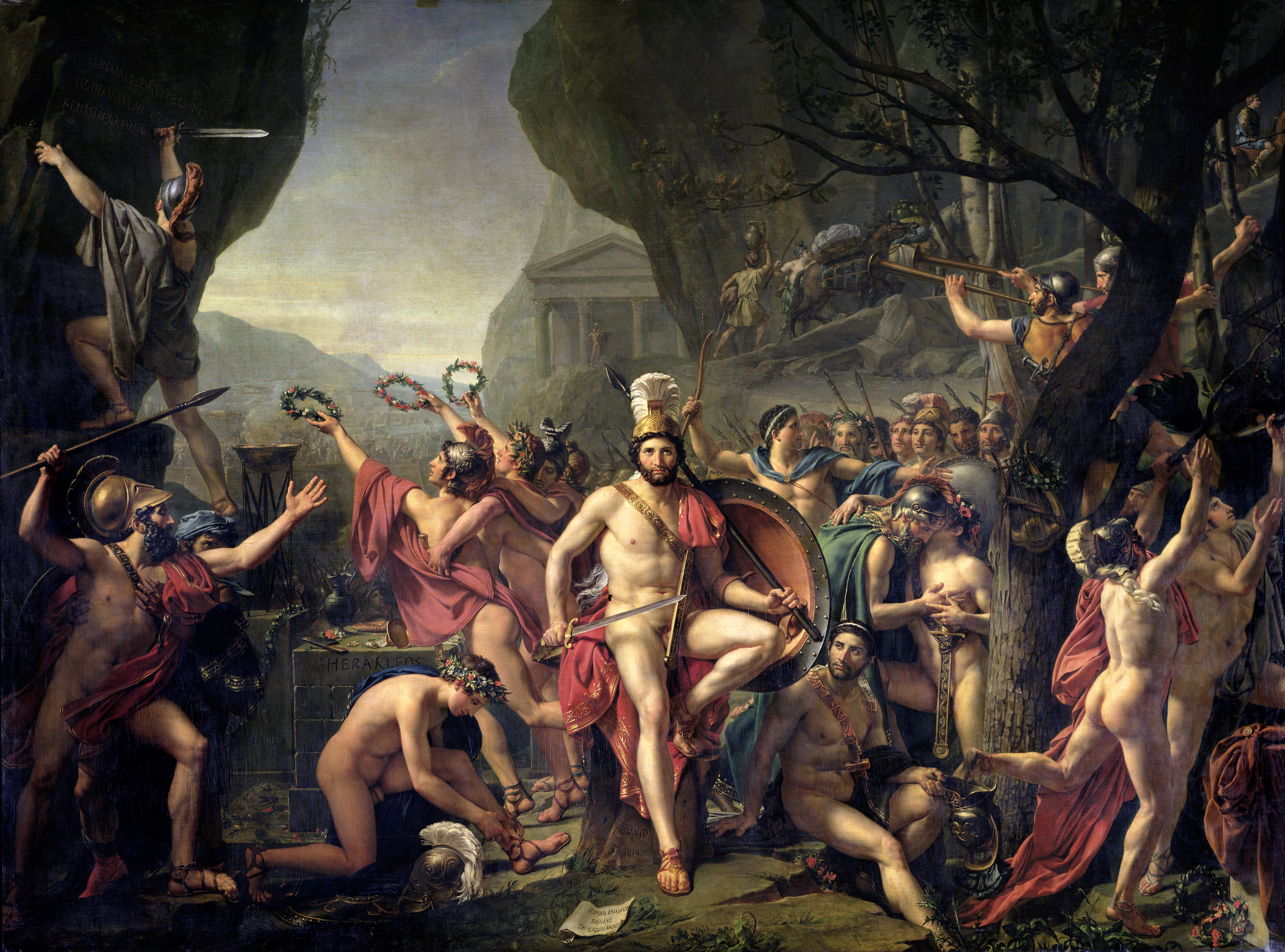 I am looking at the old painting by Jacques-Louis David, of Leonidas and his 300 Spartans. They are in the narrowest constriction of the Pass at Thermopylae, waiting for the foe they cannot vanquish, but must hold. They are about to die. They know this. They had heard the Delphic Oracle who had warned them that “not even if they had the strength of bulls or of lions could they resist the Persian.” Leonidas too heard the Oracle and so had chosen, not the three hundred youths who usually accompanied him to the field, but the same number of men who had sons living, and whose families might live on.

So they stand there on the threshold of Undying History, not knowing that they are to become Immortal in their Defeat; not knowing that nearly 2,500 years afterward, their valor, transmitted to posterity, was to repeat its immortal gesture.

Oh, I dare say that when the Greeks heard of the defeat at Thermopylae, they considered that all was lost. A Spartan King, the very soul of their war party, had fallen; their vanguard had been cut to pieces; the strongest position in Greece had been forced by the enemy.

For Xerxes, until then, had thought that courage was a thing begot of victory alone; and when his Persian scouts appeared for the first time in front of the Pass, and did not find the Spartans cowering behind their walls, Xerxes thought them madmen for not taking to flight. So the Medes came on with great confidence, pushing forward into the defile till they formed a long deep column whose front was no broader than that of the Greeks. Then the shock came.

But let Herodotus tell about the third day at Thermopylae:

So the barbarians under Xerxes began to draw nigh; and the Greeks under Leonidas, as they now went forth determined to die, advanced much further than on previous days, until they reached the more open portion of the pass. Hitherto they had held their station within the wall, and from this had gone forth to fight at the point where the pass was the narrowest. Now they joined battle beyond the defile, and carried slaughter among the barbarians, who fell in heaps. Behind them [the Persians] the captains of the squadrons, armed with whips, urged their men forward with continual blows. Many were thrust into the sea, and there perished; a still greater number were trampled to death by their own soldiers; no one heeded the dying. The Greeks were reckless of their own safety and desperate, since they knew that, as the mountain had been crossed, their destruction was nigh at hand. Accordingly, they exerted themselves with the most furious valor against the barbarians.

By this time the spears of the greater number were all shivered, and with their swords they hewed down the ranks of the Persians. And here, as they strove, Leonidas fell fighting bravely, together with many other famous Spartans…. And now there arose a fierce struggle between the Persians and the Spartans over the body of Leonidas, in which the Greeks four times drove back the enemy, and at last by their great bravery succeeded in bearing off the body.

Drawing back into the narrowest part of the pass, and retreating even behind the cross wall, they posted themselves upon a hillock, where they stood all drawn up together in one close body, except only the Thebans. The hillock whereof I speak is at the entrance of the straits, where the stone lion stands which was set up in honor of Leonidas. Here they defended themselves to the last, such as still had swords using them, and the others resisting with their hands and teeth; till the barbarians, who in part had pulled down the wall and attacked them in front, in part had gone round and now encircled them upon every side, overwhelmed and buried the remnant which was left beneath showers of missile weapons.

The slain were buried where they fell; and in their honour, nor less in honour of those who died before Leonidas sent the allies away, an inscription was set up, which said:

Go, stranger, and to Lacedaemon tell
That here, obeying her behests, we fell.

“What was this valor in the Greeks?” puzzled the mighty Xerxes. Puzzled, too, his army, who became imbibed with an exaggerated dread of the courage of their enemy. For after Thermopylae, Xerxes could not make his ranks fight with the confidence which had been the strength of the Persian army until it met Leonidas and his Spartans, that strange breed of men which did not need the support of Victory to give it strength to die.

2,500 years. Ah, Liberty dies hard! Xerxes could not estimate its strength, three [sic] centuries ago. Nor Hitler now, nor all the Conquerors between!