It seems to me that there’s been something of an oversight in all our “how to” talk. Everybody has tossed in at least ten cents’ worth of advice to wives on “how to hold a husband.” Variations on the theme leap at you from every newspaper and magazine. Husbands, apparently, could give eels a few lessons on slipperiness.

Nobody says a word about what a husband should do to keep his wife. The assumption is that once a man’s got a wife, he’s got her, and that’s all there is to it. To add insult to injury, most people silently add, “Poor fellow!” when they say it.

It’s rather tough on the ladies. They fuss to be as well groomed at 8 a.m. as they are at 8 p.m. They keep quiet and let hubby spill all the woes of the days of the office, without even mentioning that the maid left today, or the hot water heater blew up. They religiously observe hubby’s food prejudices, and serve his favorite dishes. They study him and handle him as carefully as they would a child whose IQ shows that he’s a genius – rather nice to have in the family, but something that has to be kept swathed in cotton battling. 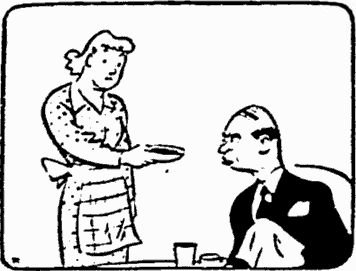 Maybe it’s all as it should be. Maybe wives are the only ones who should have to worry about the serenity of the home and the happiness of its occupants. Maybe they’re meant to be on sufferance, tolerated only as long as they practically break their necks trying to please.

Nevertheless as long as a man has to keep his wife anyhow, it wouldn’t hurt him to devote some thought now and then to keeping her happy. It might be beneficial all around, since she has feelings too.

He can’t get by with the simple righteousness of taking her to the movies every two weeks and buying her a new dress every season, either. Such things should be matter-of-course, not a matter for self-congratulation.

Let’s take it for granted that he takes her out. Why can’t he go a bit further? Instead of grumbling about how tired he is, what an imposition it is to expect a busy man to show up at silly social functions, he might try acting as if he enjoyed it. Ever better, he might actually break down and let himself have a good time. After all, he dated the girl before he married her and thought of great fun to escort her to affairs they both enjoyed.

Let Her 'Show Off’

He might come out from under that self-administered ether about “What difference does it make whether I notice my wife’s clothes? I know how she looks, and that’s the important thing.” Don’t tell a woman that her clothes aren’t important. She spends a lot of time selecting them, she puts an outfit together with loving care, and she doesn’t want to hear, “Why don’t you wear that old blue dress, darling?” when she’s showing off.

She is expected to get at least a working knowledge of roofing, if that’s her husband’s business, or making typewriters, or selling vacuum cleaners,. He doesn’t want her to be too smart about it, but he demands more than a vacant stare in response to his shop talk. Is it too much, then, to ask him in return at least to try to look intelligent about clothes? They’re not such an awfully obscure subject as one might suppose.

He might try really looking at his wife now and then instead of wearing an absent look when she speak to him, as if he had a newspaper in front of his face all the time, instead of only half. 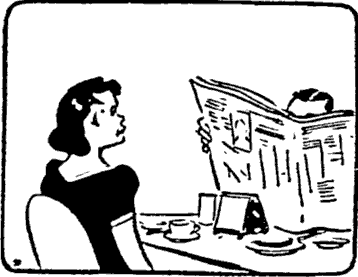 There are an awful lot of things he could do to make life happier for his wife. An d I wouldn’t be a bit surprised if, in doing them, he didn’t find himself happier, too.