I came across Tim Kennedy, (Co-host of Hunting Hitler on History) discussing the theory of Hitler escaping his Berlin bunker as hell on earth played out above him in the city streets. I put a link below to this discussion. But what i thought more interesting were the cities and towns created by the tens of thousands of fleeing Nazis who had the means and contacts to re-settle in S. America, and as a direct result, their descendants have created these German speaking and German looking cities all over Chile and Argentina. The most notorious of these cities being Colonia Dignidad, or Dignity Colony, which has to be a joke as it’s known for the torturous interrogations of any people that the then Fascist Chilean gov’t needed.

Now i personally don’t put much stock in the conspiracy of Hitler escaping his bunker, even if their isn’t much concrete evidence to support the suicide narrative. But due to the conditions on the ground in Berlin of April/May 45’, it’s completely understandable why there are only eye witness accounts that gives us the Hitler suicide narrative. Anyway, check out the interview below, i found it interesting. thats all… Colonia Dignidad ("Dignity Colony") was an isolated colony of Germans and Chileans established in post-World War II Chile by emigrant Germans which became infamous for the internment, torture, and murder of dissidents during the military regime of General Augusto Pinochet in the 1970s while under the leadership of German fugitive Paul Schäfer. Located in a remote area in the Maule Region of central Chile, Colonia Dignidad was ~35 km southeast of the city of Parral, on the north bank of the Perq...

The only reason why the “Hitler is not dead” conspiracy theory began was because of Stalin.

The theory that Hitler did not commit suicide, but instead escaped with his wife, was promoted by the Soviet government as part of its state-sponsored disinformation campaign. The myth was first presented to the public by Marshal Georgy Zhukov at a press conference on June 9, 1945, on orders from Soviet leader Joseph Stalin. When asked at the Potsdam Conference in July 1945 how Hitler had died, Stalin said he was living “in Spain or Argentina.” This has been a springboard for various conspiracy theories, despite the official conclusion by Western powers, and the consensus of historians, that Hitler killed himself on April 30, 1945.

i agree, i think it’s a preposterous idea of Hitler escaping. Also, after the collapse of the USSR, the skull fragment the Soviets claimed was Hitlers, was examined and found to be that of a woman in her thirties, which has added fuel to the conspiracy theory.

IIRC, the Soviets/Russians never claimed that the skull was Hitler’s to begin with. The dental records, though, were definitively identified. It was Adolf Hitler all along.

what do you make of the descendants of nazis living in these exclusively german settlements in S.A.?

The March 1977 Amnesty International report, “Disappeared Prisoners in Chile”, referencing a U.N. report, refers to the evidence in this way:

Another… detention center described in the [U.N.] document, in which it is alleged that experiments in torture are carried out, is Colonia Dignidad, near the town of Parral…

Hell, the guy (a former medic in the Wehrmacht) whose followers helped create this settlement was a convicted pedophile.

Paul Schäfer Schneider (4 December 1921 – 24 April 2010) was the founder and former leader of a sect and agricultural commune of German immigrants called Colonia Dignidad (Dignity Colony)—later renamed Villa Baviera—located in the south of Chile, about 340 km (210 miles) south of Santiago, where Schneider committed sexual abuse of children. Schäfer was born in Troisdorf, Germany, and joined the Hitler Youth movement at a young age. He served as a medic in the Wehrmacht during World War II, whe...

Also, it’s not like German Chileans were anything new.

German Chileans (Spanish germanochilenos, German Deutsch-Chilenen) are Chilean citizens who derive their German ancestry from one or both parents. They are chiefly descendants of about 30,000 immigrants who arrived between 1846–1914, most following the Revolutions of 1848 in the German states. In the 1907 census, Germans were the fifth-largest immigrant group in Chile, after Bolivians, Peruvians, Spaniards and Italians. From the middle of the 19th century to the present, they have played a si...

interesting, i wasn;t aware of the german immigration into S.A. during the mid to late 19th century. good stuff Norm.

There is abundant concrete evidence that Hitler killed himself on April 30 1945 at approx. 15:30 hours CET in the Führer Bunker together with Eva Braun, whom he had married about 40 hours earlier. Eva bit into a cyanide capsule, Hitler then shot her and himself in the head with his own pistol, a Walther PPK 7.65 - whether, or not he also took cyanide while shooting himself is unclear. 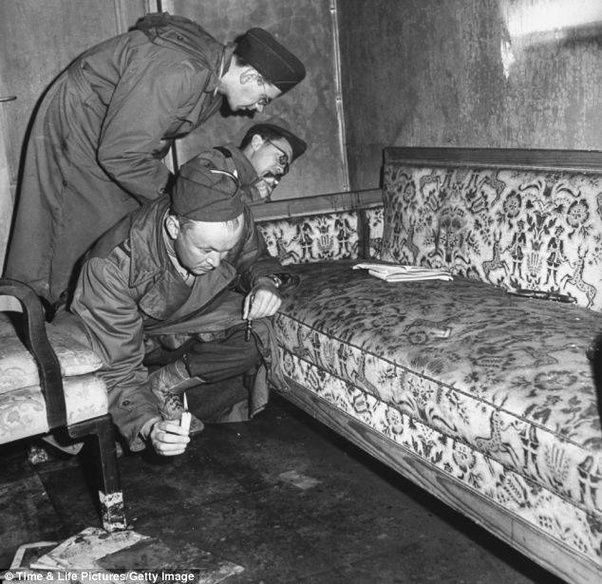 The couch in the Führerbunker, where Hitler and Eva Braun killed themselves being examined by US War Correspondent in May 1945.

Their bodies were then taken outside, doused with petrol and burnt. Heinz Linge, Hitler’s valet and Martin Bormann, head of the chancellery organised the cremation. Several eye witnesses, including Goebbels (who later committed suicide with his whole family) were present. Due to not having enough fuel the bodies were only partly incinerated. They tried to get the bodies completely burnt until 18:00 when SS officers Ewald Lindloff, and Hans Reisser were charged with disposing of the bodies. They put them in a shallow bomb crater and covered them up as best they could.

On May 2 the bodies and those of what is believed to be his dog Blondie and her pup Wulf were found by the Soviet intelligence services SMERSH - charged with the task of locating Hitler, or his remains. What was left of Hitler and Braun, and the bodies of Goebbels with wife and six children were taken to a Red Army camp outside Berlin. An extensive autopsy, of which the records were declassified in the 1990s, was carried out on the Führer and then they were all buried in unmarked graves at the same Red Army encampment. During the autopsy Hitler was conclusively identified using dental records provided to all Allied commands that they had acquired from his dentist’s nurse, who the US forces had captured earlier in the year.

These facts are uncontested and well documented. 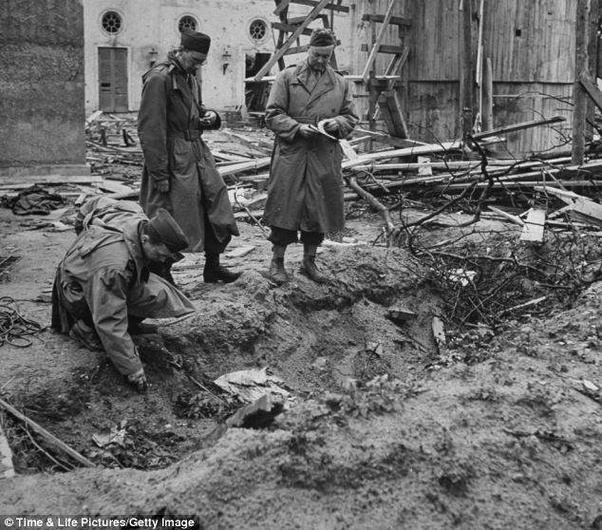 US soldiers at the shalow grave where Herr und Frau Hitler, Blondie and Wolf where probably temporarily buried by Lindloff and Reisser. The picture for Time & Life Magazine was taken after the fall of Berlin and several days after the removal of the corpses by Soviet SMERSH agents.

This is when the rumours start - reluctant to publicise Hitelr’s death for reasons of making him a martyr, Stalin now had the Soviet intelligence services spread the fake news that he had escaped. Reports of his death were already out since days though, so the effect of this was only to confuse the public. Albeit completely disproven these rumours persist to this day (clearly).

Over the next year the bodies were uninterred and reburied several times, until 21 February 1946 when they were left in an unmarked grave in a SMERSH facility in Magdeburg. Finally, in 1970 on April 4 what was left of them was once again dug up and cremated and the ashes poured into a nearby creek. The facility was going to be handed over to the GDR military and the KGB had decided to avoid any future risk of a Nazi shrine at the burial site at all cost and wanted the remains destroyed. A piece of a skull and a row of teeth were preserved by the KGB as evidence - they’re still in Moscow at this point - although it remains unclear if the skull piece is his, Eva’s or one of the Goebbels’ the teeth have again been compared to Hitler’s dental records by several independent forensic specialists and they are conclusively his.

it remains unclear if the skull piece is his, Eva’s or one of the Goebbels’

In 2009, scientists at the University of Connecticut identified that skull piece as belonging to a woman, so, from what I know, it’s probably Braun or Magda Goebbels. But then again, there were issues with the storage of said skull piece.

A skull fragment thought to come from Adolf Hitler is in fact that of an unidentified woman, according to a US study that has resurrected questions about the Nazi leader's death.

For a while, this brought the conspiracy theories regarding Adolf Hitler’s death back into the spotlight. However, this didn’t change the consensus that Hitler died – only that the skull purported to be his belonged to someone else.

IIRC, the Soviets/Russians never claimed that the skull was Hitler’s to begin with. The dental records, though, were definitively identified. It was Adolf Hitler all along.

In the past I had heard the rumors that Hitler didn’t actually die in the bunker as history has always reported. As a graduate student in history of course the evidence did not support those rumors. Viewing these last posts as to how the rumors got started was fascinating.