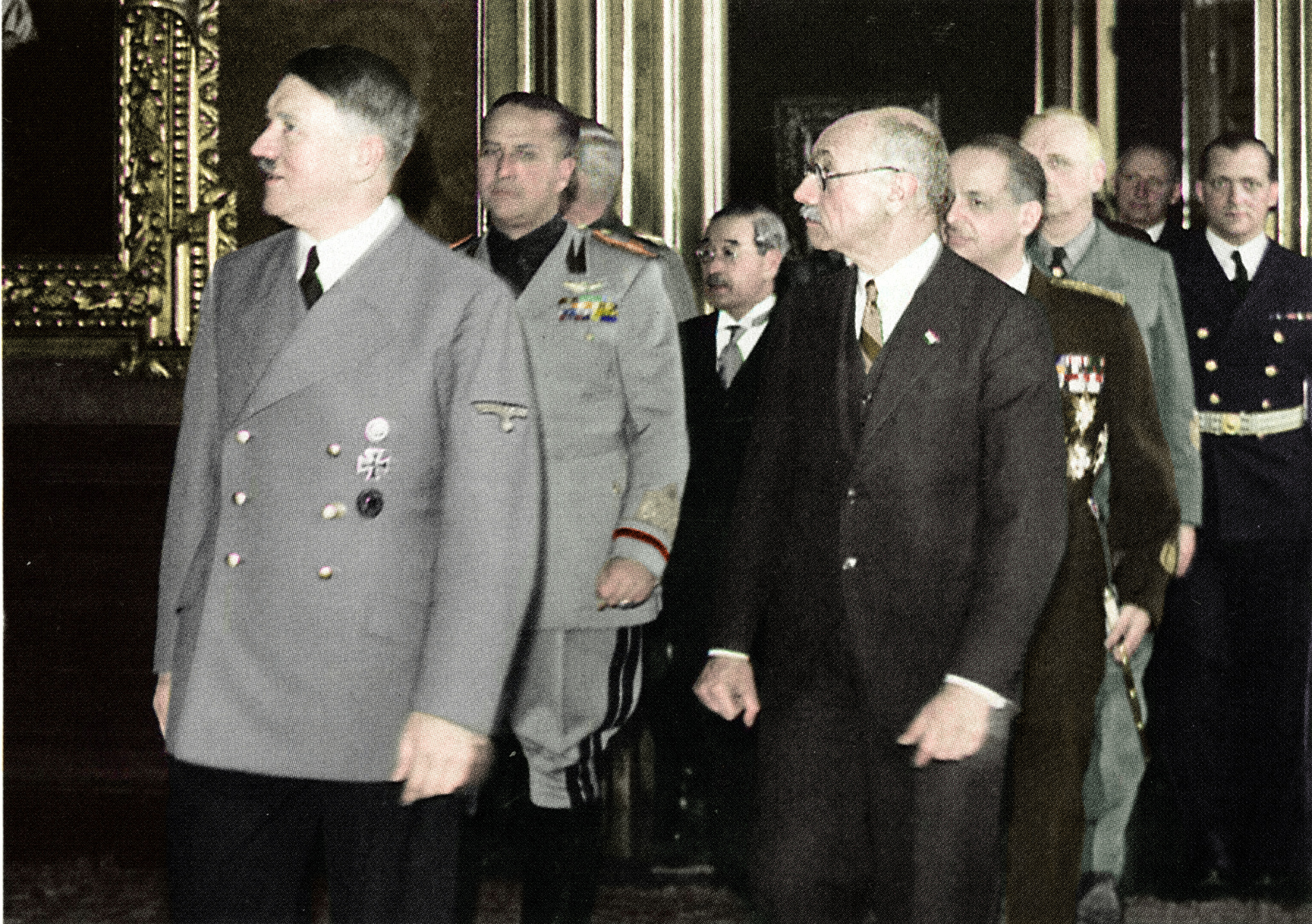 German Foreign Minister Joachim von Ribbentrop, in a speech immediately after Hungarian officials has signed the agreement, said that other powers were expected to follow.

Diplomatic sources at Bucharest said that Romania’s adherence to the Axis would be signed Friday when Romanian Premier General Ion Antonescu visits Berlin.

Adolf Hitler, who arrived in Vienna today, was not at the ceremony, which with speeches lasted only 20 minutes.

Hungary joins the Berlin tri-power pact with the intention of contributing her strength to the new order in Europe now as well as during the liquidation of the war.

The Axis powers’ new ally is the gateway to the Balkans. A remnant of the old Austria-Hungary Empire, ruled by a 72-year-old regent, Admiral Miklós Horthy, who drove the Communist Béla Kun from power after the World War, Hungary has been growing for two years with German support, at the expense of her World War enemies.

As an active ally of Germany, Hungary could throw open her borders and roads to German troops bound southeast for Romania, where they already are well established, or could provide an easy route for German troops moving south to the Yugoslav border.

All indications here, however, were that the alliance, as affects Hungary, was of a political nature – that Hungary merely was taking her place in the “new order” in Europe and Asia the Axis powers seek to create.

DNB, the official German news agency, reported at Berlin that Hitler was met by Foreign Minister von Ribbentrop, who escorted him to the Imperial Hotel where he appeared several times on the balcony in response to cheers. DNB said the people in Vienna had been excited all night in anticipation of today’s events and that countless thousands were in the streets to greet Hitler although his arrival had not been announced in advance.

Explicitly, Hungary signed a protocol binding herself to the German-Italian-Japanese alliance. The protocol read:

The governments of Germany, Italy and Japan on the one side, and the government of Hungary on the other side, establish by their undersigned plenipotentiaries the following:

ARTICLE 2
Insofar as the proposed joint technical commission, provided in Article IV of the tri-power pact, touches on questions which concern Hungary’s interests, a representative of Hungary also will be added to the council of the commission.

ARTICLE 3
The text of the tri-power pact is attached to this protocol as a supplement. The foregoing protocol is drafted in the German, Italian, Japanese and Hungarian languages whereby each text is valid as an original. It is effective the day of signature.

Text of the Hungarian statement follows:

Germany, Italy and Japan have concluded an alliance in order to prevent the extension of the war, which heavily burdens humanity, and to provide the world as quickly as possible a lasting and just peace again. The great powers are fighting in order to create a new order which is agreed upon to promote the development of peoples in their rightful areas and increase their standard of living.

By an unjust and demoralizing Paris peace debate, Hungary was crushed to the ground and turned during the last decade to those powers for support which were struck by the same fate and similar injustice, who were striving to achieve their living rights and a revision of the dictate of fighting.

These alone were seriously prompted and able to aid their comrades in fate, weakened in power and fighting hard to improve their lives.

Without Loss of Blood

During the course of the last two years Hungary actually was able, with the support of Germany and Italy, without the loss of blood and in a peaceful manner, to achieve a revision of the territorial decisions of the Trianon peace dictate. Both great powers thereby not only obligated Hungary to lasting thanks but also proved by acts that revision can be achieved everywhere with peaceful methods where the smallest possibility exists.

They thus created in the history of Europe a new epoch which opened an era of policy, understanding and insight instead of a policy of hate which has been born in bloodshed.

Italy and Germany represented in recent decades a policy of understanding which led to an alliance with Japan and whose goal is permanent world peace based on justice. This alliance is directed against nobody. A similar goal and a common past determine the position Hungary has chosen. Hungary wishes to maintain good relations with all neighbors who respect her right to historical development.

Others Urged to Join

In view of this the Hungarian government greets with special satisfaction Article V of the tri-power pact (inviting other powers to participate).

With its unbroken, unaltered foreign policy and objectives in the past strengthened by successes thus far with faith in the future, Hungary joins the Berlin tri-power pact with the intention now, as well as during the liquidation of the war, of contributing its powers to a better, happier political and economical new order in Southeast Europe.

The protocol was signed in Gobelin Hall of Belvedere Palace. Herr von Ribbentrop spoke briefly before and after the signing. A cold buffet luncheon was served following the ceremony. Hitler joined the signatories for the luncheon.

Meanwhile in Berlin, Hitler’s newspaper Völkischer Beobachter said the Vienna negotiations and all diplomatic conferences of the past week marked the beginning of a reorganization of Europe within the framework of the tri-power alliance.

The newspaper said Germany intended to accentuate the new order not only in Europe but also in “the mighty Eurasian area,” and that Germany and Italy would not “tolerate any nation sabotaging this reconstruction through unreasonableness, ill will or lack of foresight.”

It said that “British speculation on a break in Berlin-Moscow relations is finally smashed…Greece will be England’s last adventure.”

Istanbul, Turkey, reports said the government had suspended 32 trains, including 22 expresses between Ankara and Istanbul, as a result of “the present situation.”

I’m going to hold off on adding Hungary to the Axis on my weekly posts until the Invasion of Yugoslavia in March because they haven’t declared war, been attacked or attacked another country yet.

That’s how the Press reported it.

They must press the issue then.

Hosted by Maurice Chavez? If so, who do you think will play him in 1940?

Had to google him.

If it hosted in germany then surely Harry Giese.

Despite having played gta vice city almost to death i never actually payed attention to the radio. Mainly because I was more concerned with shedding the 5/6 stars I got.

It’s surprising that Hungary would have joined the Axis before Germany attacked Russia.

i never actually payed attention to the radio.

Look out for Vice City Public Radio. You’ll hear him there.

It’s surprising that Hungary would have joined the Axis before Germany attacked Russia.

How so? Now seems as good a time as any. The Axis powers are riding high & their redrawing of the map has been good for Horthy’s Irredentist goals.

Hungary is the first country to join the Tripartite Pact. Her participation paves the way for other countries sharing a common purpose and ideal with Japan, Germany and Italy.

It will unquestionably contribute toward attainment of the Tripartite Pact’s fundamental object by strengthening the respective positions of Japan, Germany and Italy in greater East Asia and the region of Europe.

Although Japan’s controlled press is attempting to stir up a to-do over Hungary’s admission to the three-power brotherhood, there is no indication that the event will produce any important change in the Far Eastern picture.

About the best that the Japanese government can hope is that the acquisition of a new partner will give a slight stimulus to the Japanese public’s enthusiasm for the triple alliance.

Responsible British quarters, ridiculing today’s Vienna ceremonies bringing Hungary into the Axis alliance, said that “one may expect soon the blossoming of a grandiose scheme for a new order of the firmament.”