In Hollywood, a dancer’s part is cut from a movie by the time it is released. Instead of sulking or shrugging philosophically or raising an ordinary loud fuss, what does she do?

She “strip-pickets.” Daily she pickets the producers’ office, each day removing an article of clothing. A strip-tease, something new in labor movements. 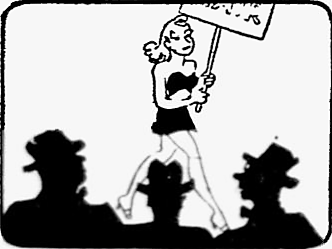 Then, just when the revelations become interesting and crowds begin to gather, the producers produce an overcoat to cover the fair maiden’s form and whisk her inside. So, with mutterings of “publicity gag,” the crowds go home.

In Hollywood, too, a man gets a divorce. It is his fourth. He had led a decidedly hectic life and should, by all rights, be just a trifle weary of marriage.

But no. On learning of his new freedom, John Barrymore says, “I am greatly relieved that my divorce is all over and that I am free to resume my search for the perfect mate.”

A Fine His Reward

In London, a man removes a time bomb from a roof, thereby saving an apartment house from destruction. His reward, after arrest, is a 100-pound fine, about $400 the way money is figured now.

He hears the bomb fall and sits waiting for it to explode. The fact that it doesn’t annoy him so much that he trots up to the roof to look. Having seen it, most people would have run like mad. But, unable to find the fuse and prevent the explosion, this fellow picks the thing up and trots put into the street with it. The man runs around with about 250 pounds of potential death in his arms, trying to find a safe place to put it, until he’s arrested and taken to court.

In New York, a woman whose name has been synonymous with expensive marriage, but not with romantic moonings, these many years takes to a new occupation. Peggy Hopkins Joyce, best known as a devotee of divorce courts, diamonds and orchids, takes a flyer at writing love songs, of all things. 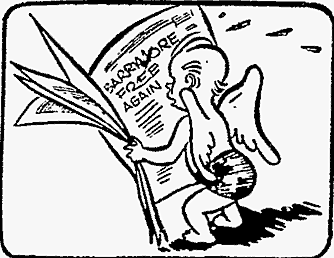 Then, back in London again, women are beginning to protest that the pretty girls are getting all the breaks. With transportation uncertain, hitchhiking is the order of the day there. And it seems that a pretty girl is still like a melody.

The complaint of one of the shunned ones reads:

I have seen motorists creep along the curb, ignoring requests from older and less attractive women until they come across a pretty one. It is really most unfair.

That’s the way it goes. Situations unthinkable only a few years ago find people reacting in typical fashion – which is to say, in unpredictable fashion.

Given any set of circumstances with any set of persons, you’ll find reactions as varied as the people themselves. The only thing you can count on is that each will act according to the particular quirks which make him an individual. And given those quirks, how on earth can you ever predict anything at all about what people will do tomorrow, or even the next minute?