How Sofia reacted to the Treaty of Craiova

“During his lunch-time show, the speaker for Radio Sofia mention that in 2,30 in the afternoon, Prime Minister Bogdan Filov was going to hold a speech on the radio. That and the fact that for the next several minutes, the radio station would play nothing but national songs and marches, made many listeners drop whatever they were doing and stay glued to the radio. Rumors spread like a typhoon through the capital.”

“2,30 approaches. Everyone is on edge. The speaker called in and said that the Prime Minister’s speech would be delayed for 15 minutes. The anticipation was painful, as the waiting did not end after fifteen minutes, nor did it end after a second or a third delay.”

“Most in the editorial staff were already aware of what the speech was probably going to be roughly about. Thus, they sent out 4 editors in their automobiles at precisely 2,30 PM, to the outskirts of town to report on the people’s reaction.”

“One of our editors drove to the tobacco factory at ‘Vranya’ street. The automobile’s powerful radio was playing the Dobrogean march. We stopped in front of the factory. One of the supervisors greeted us, immediately realized what was happening and shouted: Paydos! Paydos!”

“On the windows of the tall building, we saw hundreds of workers, male and female, in white clothing that started waving their hands and shouting ‘Houraah!’. Their screams drew the attention of the workers in the other nearby warehouses. Workers were circling the car as traditional ‘Horo’ dances played. Then, the melody suddenly went silent and the speaker once again said that the Prime Minister’s speech has been delayed for another 10 minutes. More excitement and more tension. Finally, the speaker turned to the audience and declared that the Prime Minister’s speech is about to begin. Grave silence followed.”

"My fellow Bulgarians,
I am happy today to announce to you a new joyous occasion, which the Bulgarian people have been anxiously anticipating for the past few days. Our Golden Dobrogea is returning to the Fatherland. Today at 3 hours and 20 minutes in Craiova, a treaty was signed between Bulgaria and Romania with which the two countries, determined to restore their good neighborly relations, have agreed to the return of (Southern) Dobrogea to Bulgaria in her 1912 borders. With this, we are also tearing up the chains of the Neully treaty.

The Bulgarian people can rightfully celebrate today, as the beacon of Bulgarian justice has shined through. Our policies, wisely headed by his Royal Majesty, and our patience, born from faith and unity has already bore fruit. In this celebratory hour, let me remind you that the positive outcome of the Dobrogean question could not have been done without the help of the great leaders of Germany and Italy. With this, they have not only earn the friendship and gratitude of the Bulgarian people but also for the stabilization of peace in Southeastern Europe. This transfer was greeted with sympathy and approval from the entire world, as the Bulgarian cause was just, and sooner or later justice would have prevailed.

The Bulgarian people have never lost faith in the divine justice. They will forever keep this faith that has held them to now. Sincere in its desire for a peaceful solution, the Bulgarian government and Bulgarian people did everything they can to ensure that the Dobrogean question was solved peacefully and without the spilling of blood. The true value of this treaty comes from the fact that now, Bulgaria and Romania can once more resume their traditionally good neighborly relations.

Now that Dobrogea is once more a part of us, let us thank the Lord above that he allowed us to live and see this joyous occasion. On behalf of the government, I would like to offer my sincerest greetings to all Bulgarians and Dobrogeans. Let us all, united under the rule of His Royal Majesty the Tsar, work for the prosperity of our country.

“Prime Minister Filov’s first words about the liberation of Southern Dobrogea were met with a thunderous ‘Huraah!’. The screams echoed all the way from the outskirts to the center of the city.”

“Our editor moves along through the capital, reaching the Dobrogean district. We arrived only 20 minutes after the announcement had been made. From a distance, we could see a group of children, carrying a giant flag to the school. Everyone agreed that the Dobrogean children had the right of way. These that never had the chance to see their parents’ homeland but knew so much about it. They greeted us with their own childinsh ‘Huurah!’, inspired by the patriotism of their fathers and older brothers.”

“‘Long live Dobrogeam long live our brethren on this scared land, long live the unification of the Bulgarian people and to the future of a powerful and united Bulgaria!’ - this was what you would hear from the massive manifestations that were taking place all over the city.’”

“A great enthusiastic crowd of over 30 000 people had formed. The manifestations carried over toward the Central Government buildings. There, the ministers were having the meeting. Shouts of ‘Long live free Dobrogea!’, ‘Long live Bulgaria!’, ‘Long live the Tsar!’. The minister’s meeting is cancelled and they come out onto the balcony. Mr. Zahariev gave a short speech where he thanked the people for their efforts in the liberation of Dobrogea and the victory for justice. Mr. Gabrovski also let out a speech which was greeted with a massive ‘Huurah!’, after which he started singing ‘Oh, dear Dobrogea!’”

“The celebrations moved on to the home of the patriarch of the Bulgarian army, the old General D. Nikolaev, who appeared at the window. Here, Mr. Zahariev congratulated the veteran General for living to see a reunited and strong Bulgaria. Tears flew from the old general Nikolaev’s face.”

“Along Ferdinand boulevard, the people marched towards the Hungarian delegation next, singing patriotic songs. Here, Mr. Zahariev gave a speech about the common struggles of the Hungarian and Bulgarian people and their common goal of tearing up the treaties of Trianon and Neully.”

“The celebrations once again moved on, now to the home of General Nikola Zhekov, the former (WW1) head of the Bulgarian army. He gave an energetic response:”

“I have lived for 20 years with pain in my heart over my divided fatherland. But I, as did the Bulgarian people, managed to live through this. Now come happy days for all Bulgarian people. I lived and I will outlive the day when the Bulgarian national ideal will be achieved.”

“From there, the manifestation moved on to the National Assembly, where Mr. Zahariev asked the people to kneel down pay respect to those fallen for the liberation and unification of the Bulgarian people. It was a touching moment. Everyone kneeled down and somberly sang ‘Passed on’. Tears streamed along the people’s cheeks. The realization that the countless sacrifices were not in vain took hold. A somber gratitude to their memory excited the people…” 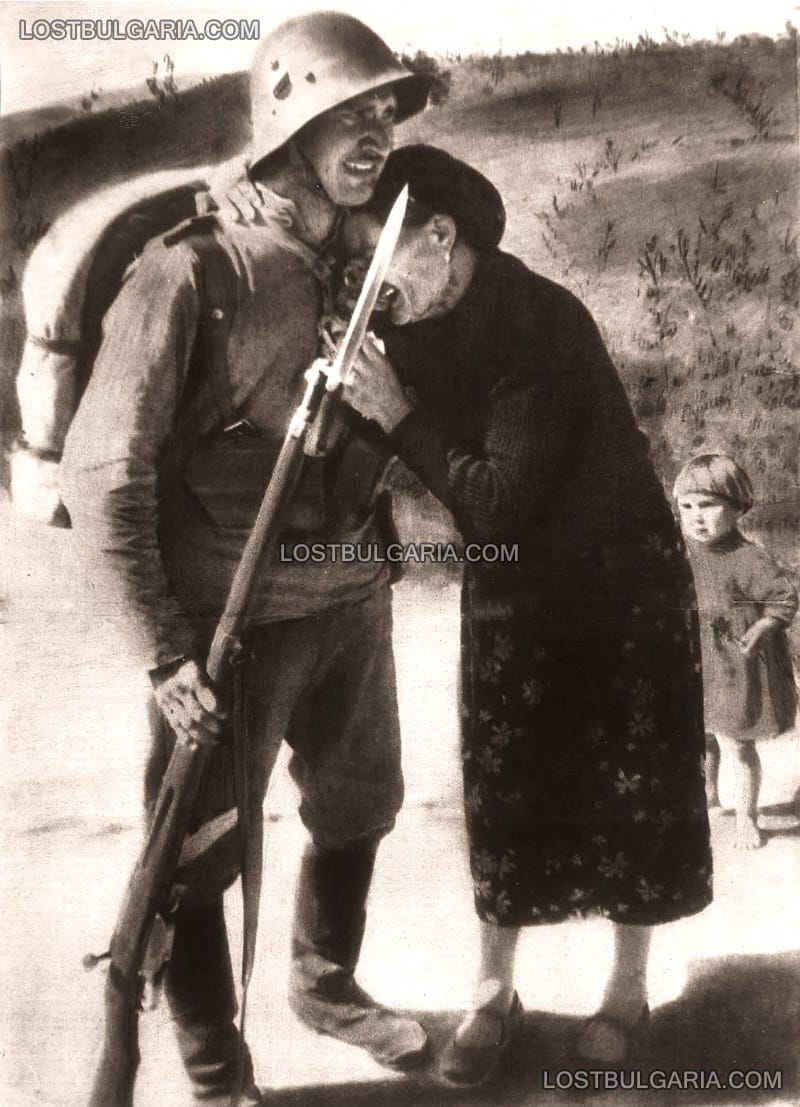 I know Southern Dobruja is still a part of Bulgaria today, but Northern Transylvania was returned to Romania after the war. Do you by any chance know why this was the case?

It’s hard to say for certain, though there are a few factors that likely played a role. Southern Dobrogea generally wasn’t as ethnically mixed as Transylvania and the Romanians themselves acknowledged the Bulgarian majority in the region. Even though the treaty of Craiova happened under German pressure, it also had international recognition by the UK and the USSR. I believe it was Churchill that said “If (Southern Dobrogea) is all that is going to take to keep them out of the war, then by all means.”

With the Soviets its a bit more tricky. They were in favor of giving the entire region of Dobrogea (North and South) to Bulgaria in order to “write the injustice of the past and re-connect the North and South Slavs”. The Soviet’s willingness to do that was used by the Bulgarian diplomacy to pressure Hitler into helping as well.

The whole idea of the Treaty of Craiova was that it was built on a justified claim. After the treaty was signed, the Soviets actually offered the Northern part as well, even stating that if Romania refused, the USSR would declare war upon them. The Bulgarian government however refused that offer, as it would’ve clearly be seen as a contradiction to what was supposed to be a justified claim.

I don’t know much about what happened after that, but I do know that during the secret negotiations with the Allies in 1943, it was already guaranteed that Bulgaria will keep Southern Dobrogea.

The last living woman to greet the Bulgarian army in Silistra… is Romanian.

The only living person from Silistra who greeted the Bulgarian army 80 years ago turned out to be a 102-year-old Romanian woman. She recognized herself on an archival photo that was provided by the Regional History Museum.

Zhenika Velikova:
“That’s me right there, with the other girls we greeted the Bulgarian soldiers on October 1st. My husband is behind me.”

“Days before the army was to enter Silistra, they were gathering young girls and instructing us on how to behave and what to chant. I didn’t know a word of Bulgarian, I was only married (to a Bulgarian) for about two months and we had just moved into the city. I wasn’t worried that the Romanian authorities were being replaced with Bulgarian ones; in fact, I was happy to have left my home town of Galati and be with the man I love; and it’s not like they knew who I was anyway. I chanted ‘Ura!’ - in Romanian its the same. When my family wished me goodbye, they cried and laughed. I was the seventh-born child in my family; the previous six did not survive. That is why my father waited for 10 days before registering me as a newborn.”

She was born in 1918, at the tail end of WW1 at the Romanian city of Galati. Because her father waited to register her, her birthday is officially listed as November 29th, but she and her family continue to celebrate it on November 19th regardless. After her, the family had another 9 children, six of whom lived to adulthood.

She eventually fell in love with a Bulgarian sailor from the village of Alfatar (in Southern Dobrogea, part of Romania at the time) and in the summer of 1940 they both moved to Silistra. And on October 1st, that same year, she finds herself in a traditional dress, without knowing a word of Bulgarian, and welcomes the Bulgarian army.

“At the first, the (husband’s) family didn’t want me. None of them spoke Romanian and I didn’t speak Bulgarian; but with patience and good will it all fell into place.”

She quickly got used to her way of life after the wedding and continued to work in the fields from time to time as late as her 85th birthday. She spent her life working at a sowing factory and retired 47 years ago.

Today, she is survived by her two daughters, two granddaughters and one grandson, and a 4-year-old great-granddaughter.