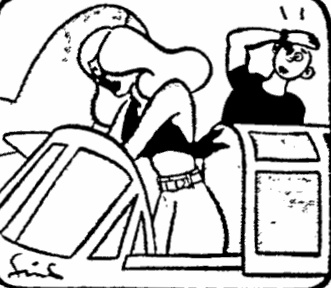 Los Angeles, Calif. –
Aviation in California has a new problem.

It’s not tricycle landing gears, pitch propellers, firepower or rationed rubber. No, its new problem is an old one, and involves what Kipling once foolishly described as:

Since the attack on Pearl Harbor, California’s major airplane factories have employed thousands of women workers. There is scarcely a plant that doesn’t have a powder room, or where the rouge and lipstick don’t stand on equal terms with the cut-plug and the briar pipe.

The girls are doing a magnificent job. They have proved they are worth the 60¢ and 75¢ an hour that they receive for helping in the assembling of bombers and fighters and trainers.

On the more monotonous jobs – you know., the kind where, for hour after hour, you tuck a little bit of wire here, you twist a bolt here, you pat something down here – they have shown themselves more efficient than men.

But the girls have produced a few headaches, just as girls have always done since Eve was determined to keep the doctor away with a bite into that forbidden Winesap.

Clothes have been a great problem. When the plants were first opened to women workers, the gals arrived on the job wearing any and everything. They came in voile creations, dotted swiss jobs, crepe print numbers, tailored suits, Mother Hubbards, boudoir aprons, slacks, shorts and almost everything else that you can find in a girl’s wardrobe.

Tough foremen threw up their hands in horror. Hard-bitten machinists quivered and shook at the sight. Overalled mechanics muttered oaths that all but started the motors of nearby planes.

The girls were told that they must report in slacks; that to allow them to frisk around in billowing skirts would endanger their lives.

No one really knew the variety of slacks that are worn until the girls started showing up for work in their slacks.

The cute girl workers, the pretty ones, and the well – well, the well-built ones – took to slacks that were more appropriate for the first line of a Broadway chorus than an airplane factory. Quite a rumpus was raised when the foreman of one factory rebelled against a worker wearing a trousers and halter outfits. He demanded that she cover up some of the exposed sections of her anatomy.

The girls said okay, she would, but not until the men in the shop abandoned the habit of working without shirts. This developed into quite a battle. The men said that they had been working without shirts for years and they would be blankety-blank if any gal could come in and dictate how they should dress.

You know who won, don’t you, or aren’t you married?

What the airplane factories want is a standardized girl worker. Ones that are too pretty upset the place. As a matter of fact, the ones that are too lonely and look too well in a sweater, say, are not employed. It has been found that this type upsets the production of a plant.

It seems that no matter how patriotic a workman is, how interested he is in his work, he simply can’t help being more interested in a delicious little thing in a sunsuit than he is in a bomber.

The thousands and thousands of women workers are determined not to lose their femininity. A Los Angeles department store, in polling them to ascertain a market for their merchandise, found that the girls wanted only one kind of clothes – the frilliest, fluffiest stuff that could be stitched up by hand or machine.

I’m afraid that, war or no war, women are not going to be standardized.

Henry McLemore’s viewpoint – Lipstick invades the aviation industry, and slacks for women become a major problem of war By Henry McLemore [Fullscreen capture 282021 65849 PM.bmp] Los Angeles, Calif. – Aviation in California has a new problem. It’s not tricycle landing gears, pitch propellers, firepower or rationed rubber. No, its new problem is an old one, and involves what Kipling once foolishly described as: …a rag, a bone, and a hank of hair. You’re right, folks, it’s the gals. Blu…