Hendaye Meeting (between Hitler and Franco) on 23 October 1940

The *Meeting of Hendaye , or interview of Hendaye took place between Spanish dictator Francisco Franco and Adolf Hitler at the time, Caudillo of Spain and Führer of Germany respectively. It occurred on 23 October 1940 at the Hendaye railway station in Hendaye, France, near the Spanish-French border, attended by the Foreign Affairs ministers, Ramón Serrano Súñer of Spain and Joachim von Ribbentrop of Nazi Germany.

The object of the meeting was to attempt to resolve disagreements over the conditions for Spain to join the Axis Powers in their war against the British Empire. However, after seven hours of talks, the Spanish demands still appeared extortionate to Hitler: the handing over of Gibraltar once the UK was defeated; the cession of French Morocco and part of French Algeria; the attachment of French Cameroon to the Spanish colony of Guinea; and German supplies of food, petrol and arms to relieve the critical economic and military situation faced by Spain after the civil war. German oil production and Rumenian oil was not even enough for Reich’s military purpose consumption let alone exporting it abroad and food/grain situation in Third Reich could only be elevated barely at the expanse of occupied territories. (with Nazi-Soviet Pact , Germans were purchasing huge amounts of oil , grain and raw materials from Russians to keep their war machine running actually) Besides at this time, Hitler did not wish to disturb his relations with the Vichy French regime. The only concrete result was the signing of a secret agreement under which Franco was committed to entering the war at a date of his own choosing, while Hitler gave only vague guarantees that Spain would receive “territories in Africa”.

Spain was dead end for Axis. That country just went out of a brutal civil war in 1939 that wrecked its infrastructure and economy and destabilitised the country. Spanish dictator Franco unlike Mussolini had enough sense not to involve a slowly becoming a global conflict in this impoverished state. Most of oil and other commodities Spain needed were incoming from overseas which British could blockade easily and during Hendaye meetings when Franco asked Hitler to compensate these potential losses in case he joins Axis , Hitler found his price too high. Besides Franco wanted all French North African territories which would antagonise Vichy against Germans. A lot of Spanish generals and Franco’s consultants were on pay of British intelligence (taking bribes) On top of that in second half of 1940 and beginning of 1941 , Axis (especially Italy and also Vichy France and other Axis sattalites) began to suffer serious checks and defeats in Mediterranean and East Africa against British that went on till 1941 spring and Britain stood firm against German air bombing campaigns and U-Boat threat. These were indications war would extend not end swiftly with Axis victory which Franco noted.

Hitler personally met and Franco and spoke with him for five hours to join the Axis and joint military operations against British. But it was in vain. Franco’s attitude and tone towards Hitler was monotous and regarding whole matter as if irrevelant. Hitler eventually lost his temper and shouted “There is no matter to talk” and left the meeting later remarking that rather another meeting with Franco like this he would have three or four of his teeth extracted ! That afternoon Ribbentrop tried to have his Spanish countertpart to sign a joint declaration to participate to Axis. Again no avail. Next day Ribbentrop was swearing Franco from his behind “Coward ! He owes us everything (due to German arms shipments and volunteers sent to Spanish Nationaist side during Spanish Civil War ) now he refuses to join us !”

Finally on February 1941 Hitler wrote a personal letter to Franco , insisting him to join Axis and threatening Fascist regime in Spain could only survive with an Axis victory. It was a diplomatically tactless document. Even worse for Hitler’s Axis allience vision in Mediterranean that letter arrived on 13th February 1941 , the same day last remants of 10th Italian Army in El Aghelia was literally routed by 7th British Armored Division (Desert Rats) When Franco replied three days later he absolutely protested any allegience to Axis and reminded that even October meetings in Hendaye was out of date. 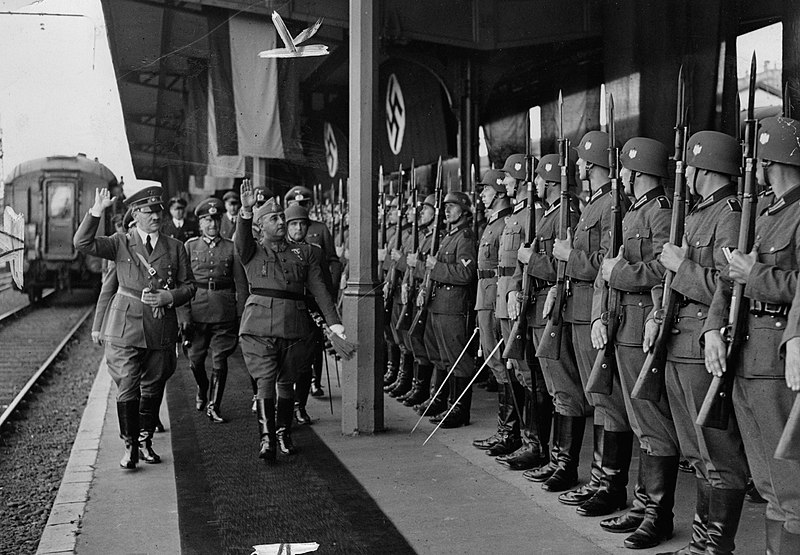