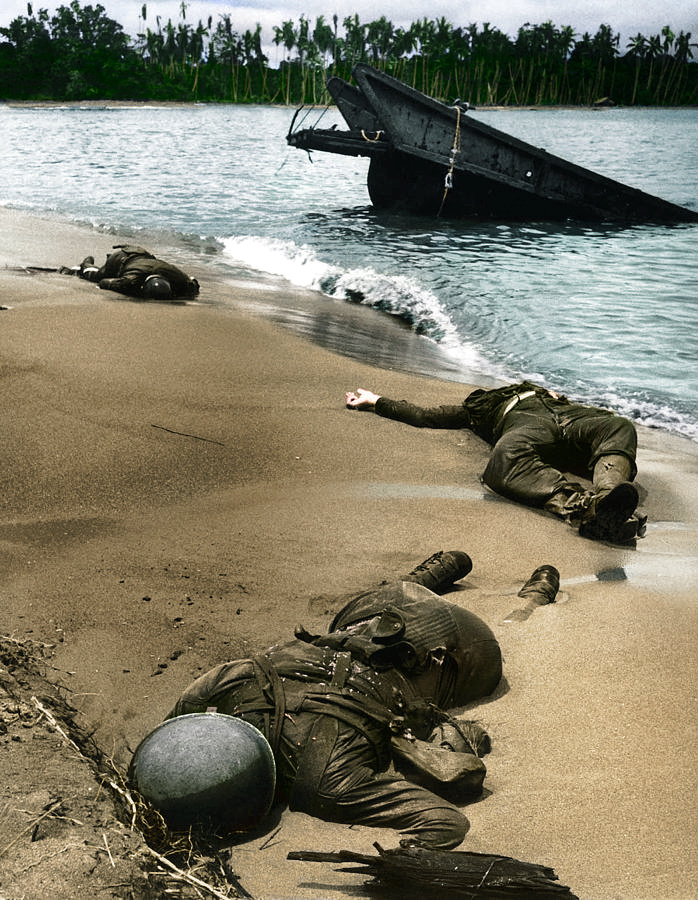 American victims of Jap treachery lie on the sands of New Guinea. These three U.S. fighters were killed on the last day of the battle for Buna last January. Japs, hiding with rifles and grenades in the sunken barge, killed the Yanks as they were mopping up.

why didn’t they click the photos of the japs?

The photographer did take pictures of dead Japanese soldiers in the area as well.

The public already saw dead Japanese bodies in the media by this time (they’re enemy bodies after all). The photo below was taken by a Marine cameraman in 1942.

The Pittsburgh Press (October 27, 1942) [10-26-42-2899] Marines look over bodies of Japs on the beach at Guadalcanal Island in the Solomons following a disastrous attempt by the enemy to land reinforcements. But other Japs did land and push into the jungles, mostly at night, the Navy admitted. These Marines smashed many Jap landing forces as U.S. airmen blasted enemy ships and landing barges. Photo from U.S. Marine newsreel.

Where these boys fell, a part of freedom fell: We must resurrect it in their name

Three dead Americans on the beach at Buna. (Photo by George Strock)

Or shall we say that this is too horrible to look at?

Why print this picture, anyway, of three American boys dead upon an alien shore? Is it to hurt people? To be morbid?

Those are not the reasons.

The reason is that words are never enough. The eye sees. The mind knows. The heart feels. But the words do not exist to make us see, or know, or feel what it is like, what actually happens. The words are never right.

Last winter, in the issue of Feb. 22, we told about Bill, the Wisconsin boy; how he struggled through the dark and nervous jungle of New Guinea, stalking Japs like a cat; how he came at last to the blue sea at the rim of the jungle, and ran out onto the white beach, blazing mad; how the Japs got him there, suddenly, when the job was almost finished, so that he fell down on the sand, with his legs drawn up; and how the tide came in…

And we said then that we thought we ought to be permitted to show a picture of Bill – not just the words, but the real thing. We said that if Bill had the guts to take it, then we ought to have the guts to look at it.

Well, this is the picture.

And the reason we print it now is that, last week, President Roosevelt and Elmer Davis and the War Department decided that the American people ought to be able to see their own boys as they fall in battle; to come directly and without words into the presence of their own dead.

And so here it is. This is the reality that lies behind the names that come to rest at last on monuments in the leafy squares of busy American towns.

Here in this picture, we meet upon a battlefield of the war.

It is true that we come late to the battlefield – much later than these boys, who were the first to arrive. The tide has already covered them at least once. The sand has almost buried the leg of one of them, and you can see the dark marking of high water on his helmet.

Even so, we are not too late to understand this battlefield. We can see roughly what happened.

They were shipped to Australia in 1942, thence to Port Moresby, New Guinea, thence by airplane over the Owen Stanley Mountains. They were set down in the heart of the jungle. Their objective was Buna.

They struggled through the nightmare – week after week of Japs lurking in trees and jungle pillboxes, week after week of foxholes and bugs and skin sores and sleepless nights. Then at last Sgt. Bottcher, with a dozen men, broke through to the sea. Bottcher’s Corner, where he held out for days, lies just beyond the coconut palms in the background of this picture.

And meanwhile the Japs had been trying to bring up reinforcements in landing barges. Many barges were wrecked on the shore by American airmen, just as the one shown here. But when the Jap soldiers were finally driven back to the sea, hey hid in these half-sunken barges. And they also constructed hidden machine-gun nests all along the shore.

So, when these three boys broke out of the jungle, they ran down to the beach, chasing Japs in a kind of fury. They were running in from the left and they had just passed the barge. And then, there was a sudden, murderous burst of fire – apparently not from the barge, but from a machine-gun nest located in the direction of where you, the reader, are sitting. The boy in front was riddled. The one in the center, who was apparently blasted over backward and has been rolled by the waves, was hit above his left hip; a bullet went into his left leg and his right leg was shattered. The third has fallen forward as if clutching a wound in his abdomen. It all must have happened in a split second.

Yes, when LIFE’s photographer, George Strock, arrived with his camera to take this picture, it was all over. And yet, miraculously, it is not too late; miraculously the battle still goes on, and we can still see, in every line of action, why it is that American boys win.

We can still sense the high optimism of men who have never known oppression – who, however scared, have never had to base their decisions upon fear. We are still aware of the relaxed self-confidence with which the leading boy ran into the sudden burst of fire – almost like a halfback carrying the ball down a football field.

We can share their impatience, their outrage at the evil of war. We can feel the fury of their attack, the hard muscles driving forward, the hot blood surging. Yes, we can tell even on this distant shore that these are our boys, born of our women, reared in our schools, bred to our horizons…

Something on the beach

And it is not enough to say that words are not enough. There is something lying on this beach that the camera doesn’t show.

It doesn’t show a green meadow stretching down from a whitewashed barn to the brook that bubbles through an American valley. And it doesn’t show an elderly man climbing up a ladder in a ripe American orchard; or a stout, gray-haired woman pulling out of the oven an American apple pie; or a red setter asleep on the sunny porch dreaming of American birds.

The camera doesn’t show a road leading around the wood lot under the big harvest moon. It doesn’t reproduce the sound of a girl’s voice when she told him, or the feel of her waist, or the memory of her promise.

And it doesn’t show the pool hall where the boys get the baseball scores, or the Congressman leaning back in his law office with his hands behind his head, or the banker scrutinizing old Sam Lawrence, or the minister in his pulpit pointing upward to where he thinks God is.

No, the camera doesn’t show America, not any part of America, not even her mighty hills and rivers, not even the great gray cities or the freight trains tramping through the night loaded with the paraphernalia of war. Out there at Buna it couldn’t show any of that.

And yet here on the beach is America, three parts of 130 million parts, three fragments of that life we call American life; three units of freedom.

So that it is not just these boys who have fallen here, it is freedom that has fallen; the smell, the taste, the sound, the sight of freedom, the desire, the realization, the manifold, intoxicating experience that freedom is. All this has fallen upon the white New Guinea sand.

America is the symbol of freedom.

It is the symbol of freedom all over the earth, wherever men dream of freedom, or desire it;

In the bright green hills of China, and under the old roofs of Prague, and in the teeming alleys of Cairo, and along the jagged Scandinavian shore.

And it is not an easy thing to understand why they are there, and why, if freedom is to live, they must be willing to die.

But this is because freedom is something more than a set of rules, or a set of principles. Freedom is a free man. It is a package. But it is God’s package.

So, when these living units of freedom are extinguished, we cannot bring them back to life. All we can do is to give meaning to their death.

And this is to say that when freedom falls, as it has here on the beach at Buna, it is our task to cause it to rise again; not in living units, which we cannot make and to which we cannot give life, but in the mighty symbol, America, the beacon for all men, which is ours to have, to hold, and to increase.