WOULD LEAD ‘PEACE FIGHT,’ WILLKIE SAYS
…
F.R. Trying to Cover Up Defense Deficiencies, He Charges in Phila.
…
MEETS N.Y. LEADERS
Asserts Those Who Boo Him Replace Thinking With Prejudice
…
New York, Oct. 5 (UP) –

Republican presidential nominee Wendell L. Willkie came back to his adopted state today in an effort to win its 47 electoral votes.

Willkie arrived in New York at 9 a.m. after ending a tour through Michigan, northern Ohio and industrial areas in Pennsylvania. Tonight he tours through Brooklyn during which he will be accompanied by Bruce Barton, New York Republican nominee for the Senate, was scheduled to start at 7:30 p.m.

New York Republican leaders met Willkie at the train. Then he went to his personal headquarters in the Commodore Hotel. He held brief conferences and then went to his home.

A large crowd was at the Pennsylvania station as the Willkie train pulled in from Philadelphia. An American Legion band played “East Side, West Side” and Willkie smiled and waved to the crowd.

Willkie planned a rest for tomorrow, after which he was scheduled to tour northern New Jersey – including a stop at Journal Square, center of Mayor Frank Hague’s stronghold – and then a one-day automobile trip through Connecticut.

I now say that only production – not orders – can defend us from aggressors. For seven years, we have also had prosperity on order. The purpose of the Republican Party in this crusade is to have prosperity on hand.

Leaving Pennsylvania, where he was both cheered and booed, Willkie predicted a Republican victory in November, but called the party workers to active efforts, asserting that they were "pitted against the most ruthless group of political operators, with billions of dollars in their hands.

As he came to New York for a series of political conferences before beginning his Brooklyn tour, Willkie was starting a 13-day trip through nine states which have 176 of the 266 electoral votes necessary for election. He will visit New York, New Jersey, Connecticut, Rhode Island, Massachusetts, Ohio, Indiana, Illinois and Missouri between now and October 17.

In Democratic centers of Philadelphia, Willkie denounced those who booed him as “poor, misled saps,” and asserted that "some of the ward heelers think it wise and smart to organize little booing sections.

I can take a million boos and still be just as happy as I am now, but the fellow it hurts is the fellow who does it, because that fellow’s mind is closed. He is no longer a freeman. He is the instrumentality through which dictators work. He is the pawn in the game. He no longer thinks. He gives up his thinking process to a prejudice or to somebody else and if I could just keep open the minds of American citizens so they will listen to arguments, keep their minds free so they won’t be slaves to political bosses, to prejudices, to vague arguments or to bunk, I shall be satisfied.

Before making a five-hour drive for Brooklyn votes, Wendell Willkie talked New York politics today with Republican leaders and told them that his month-long campaigning tours had been successful.

Simpson was ousted last spring by the forces of Thomas E. Dewey, an unsuccessful contender for the Republican presidential nomination and was a Willkie supporter at the national convention.

Among Willkie’s callers during the day was Chairman Joseph W. Martin Jr., of the Republican National Committee. Earlier, Martin told a press conference that the present campaign “is a horse race” and then issued a formal statement declaring:

I am perfectly satisfied with the way the campaign is progressing. We are getting good reports from the states Mr. Willkie has visited.

Martin asserted that Chairman Edward J. Flynn of the Democratic National Committee, had left a party convention in New York and hurried West, and that President Roosevelt had found it necessary “to create an excuse to visit Pittsburgh, Dayton and Youngstown, through which Mr. Willkie has just traveled.”

A disinterested observer can only conclude the third termers are in a bit of a panic and, frankly, they have reason to be.

Saying that “this campaign is a horse race with every indication there is an upswing in the tide for Mr. Willkie,” Martin added:

I claim he is going to win, there is a tide that will carry Willkie to a smashing victory.

The Republican Chairman said that Republicans were seeking “to wage a scientific campaign” and, when asked whether he would suggest any changes in Willkie’s stumping technique, said, “never take a pitcher out when he is going good.”

After Willkie’s luncheon, Jaeckle reported that the party group had discussed tonight’s Brooklyn itinerary and future campaign plans. It was agreed that Willkie would call off scheduled appearances Tuesday morning in New York’s garment center and Union Square. Willkie’s press secretary, Lem Jones, said that a heavy schedule that day had necessitated the cancellation. 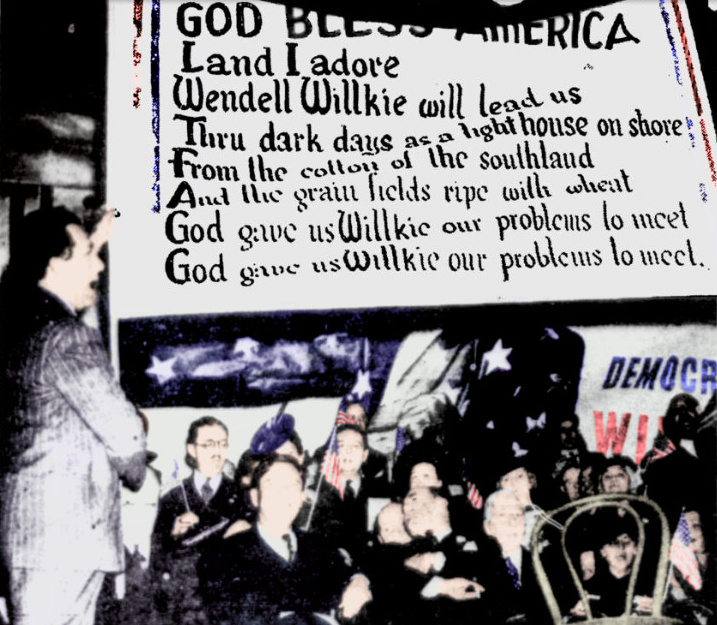 G.O.P. Presidential nominee Wendell Willkie is shown seated beneath a banner singing his praises in Erasmus Hall High School, as he was cheered by his audience during an invasion of Democratic Brooklyn.

Willkie came here this morning after speaking in the industrial cities of Ohio and Pennsylvania. He scheduled five talks tonight in Brooklyn High School auditoriums and arranged a full day of rest tomorrow.

The candidate’s aides said he advised his luncheon conferees that he was satisfied with the reception he had received on his countrywide speaking trips. They said, too, that Willkie was determined to keep up a heavy schedule from now until the November election.

Willkie was said to be delighted with the reception he had received during his hundred-odd recent campaign speeches. The nominee, it was reported, told his luncheon guests that he had insisted on visiting districts which voted overwhelmingly for President Roosevelt in 1936.

The candidate had a brief test during the morning and Dr. H. D. Barnard, his throat specialist, reported his voice was in “excellent condition” for forthcoming addresses.

More than 300 policemen were assigned to special duty along the route of Willkie’s Brooklyn tour.