Renewing his attack upon President Roosevelt’s handling of national defense, Republican presidential nominee Wendell L. Willkie asserted today that an Army housing shortage would delay for months the drafting of youths for military service and that this was “inexcusable, startling and disturbing.”

Heading west across upper New York state for a major address on national defense at Buffalo tonight, Mr. Willkie said in a speech prepared for delivery in Rochester that a lack of quarters for military conscripts “can only be attributed to pitiful inefficiency.”

A question-and-answer program featuring Mr. Willkie will be broadcast at 10:30 tonight over Station WCAE.

Mr. Willkie quoted draft officials that “no men will be inducted into the military service until full (housing) facilities are available,” and that “there cannot be enough housing to take care of our first increment of new soldiers for five months and that it will probably not be possible to meet the requirements of the total of 400,000 for another year.”

We have known for a long time that there was a lack of military equipment necessary to arm a force of 1,200,000 men. The fact that we are unable even to house these men, however, is startling and disturbing – for the American people to be subjected to so long a delay in procuring such a readily available item as housing, is inexcusable.

This can only be attributed to pitiful inefficiency.

He offered this program “to get a housing program going at full speed.”

He made five open-air speeches in Rochester before going to Convention Hall where he spoke to a crowd estimated by police at 10,000.

A cold drizzling rain fell as he rode hat-less through the city in an open auto.

In his outdoor speeches, Mr. Willkie renewed his pledge to summon a national economic conference to solve the unemployment and national defense problems. He said he would call the representatives of industry, labor, agriculture and consumers to the White House and tell them.

When the candidate concluded his speech, at one street corner a number of signs were raised at the edge of the crowd. They said, “We Have Heard Willkie, now we ARE for Roosevelt” and “Willkie is the Wall Street choice, Roosevelt is the people’s choice.”

Youths who held the signs had made no attempt to heckle the candidate during his talk.

At another stop, Mr. Willkie told workers that:

All I want from the American people is a square shake and if I’m elected President, that’s what I’ll give to you.

At Convention Hall, Mr. Willkie was introduced by Frank Gannett, newspaper publisher and unsuccessful candidate for the Republican presidential nomination.

Mr. Willkie charged that the administration of President Roosevelt “doesn’t know how to get things done” and should be removed on the ground that it sought to array class against class.

Mr. Willkie will discuss military conscription and answer the questions of voters over the Red Network of the National Broadcasting Co. from 10:30 to 11 p.m. He will be questioned by Oren Root Jr., president of the Associated Willkie Clubs.

A special bid for Democratic support was made in the Syracuse Municipal Stadium last night before a crowd officially estimated at 25,000. Mr. Willkie attacked New Dealers for dropping James A. Farley, for refusing to listen to Senator Carter Glass of Virginia, and for disregarding what he said were the anti-third term teachings of Jefferson, Jackson, Wilson and Grover Cleveland.

He also denounced Charles Michelson, Democratic national publicity director, and “that great disseminator of the truth,” for saying he had bought his Indiana farm lands at sheriff’s sales. Asserting that this was the first reaction he had been able to evoke from the Democrats and that an “issue” finally had been offered, Mr. Willkie said:

I want to meet it fearlessly and unafraid. I do own five farms. I didn’t buy any of them at sheriff’s sales but I did buy them during an economic depression because Franklin D. Roosevelt was President. And I night say that I have almost gone broke owning them. 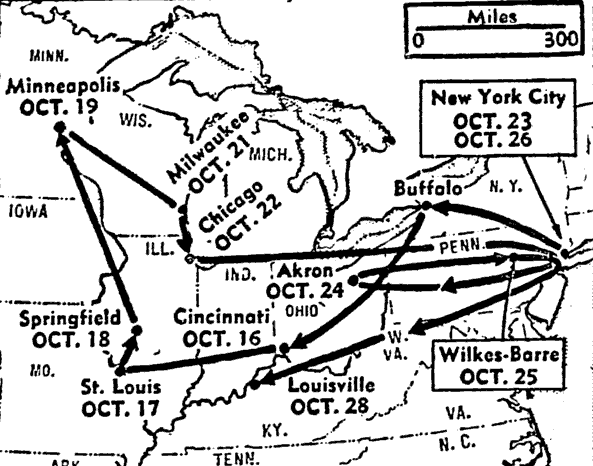 New Deal Congressional leaders charged today that Republican presidential candidate Wendell L. Willkie’s pledges to the farmer, labor and the American people were" mere empty, campaign promises" which his party would not support.

House Democratic Leader John W. McCormack “looked at the Republican Congressional record;” and charged that Republicans “talk one way and vote another.” His statement was issued by the National Committee of Independent Voters for Roosevelt and Wallace headed by Senator George W. Norris (IND-NE).

Senator James F. Byrnes (D-SC), an administration leader in the Senate, accused Mr. Willkie of making conflicting campaign promises to industry and agriculture. In a radio address last night he said that Mr. Willkie promises “all this,” and that “Heaven, too” will be added before Election Day.

Republican leaders continued their attack on the New Deal which it accuses of planning a “smear” campaign against their candidate. They charged that President Roosevelt and his running mate Henry A. Wallace have aided “a vicious attack on the loyalty and patriotism” of Mr. Willkie.

In a statement issued through the publicity division of the Republican National Committee, Chairman Joseph W. Martin said that the plan to “smear” Mr. Willkie culminated last weekend in literature prepared by the colored division of the Democratic National Committee. He claimed that complete repudiation of the effort by Democratic National Chairman Edward F. Flynn “ignores the fact that the keynote for tactics of that sort has been given by leaders of the New Deal.”

Mr. Martin cited recent statements by Governor Herbert Lehman of New York and Mr. Wallace, and said that by inference the President, too, had “cast suspicion” on Mr. Willkie’s Americanism and patriotism.