He scheduled a dinner conference with Alfred E. Smith, the 1928 Democratic presidential nominee whom Franklin D. Roosevelt twice placed in nomination as “the Happy Warrior.”

Mr. Willkie’s address will be carried by KDKA and W4AS at 10:30 tonight. Al Smith will be heard on KQV at 10 tonight.

Hammering away at the war issue and at alleged failure of the New Deal to keep promises to the electorate, Mr. Willkie told a capacity crowd of 28,000 in the Chicago Stadium last night that if President Roosevelt’s “promise to keep our boys out of foreign wars is no better than his promise to balance the budget, our boys already are almost on transports.” 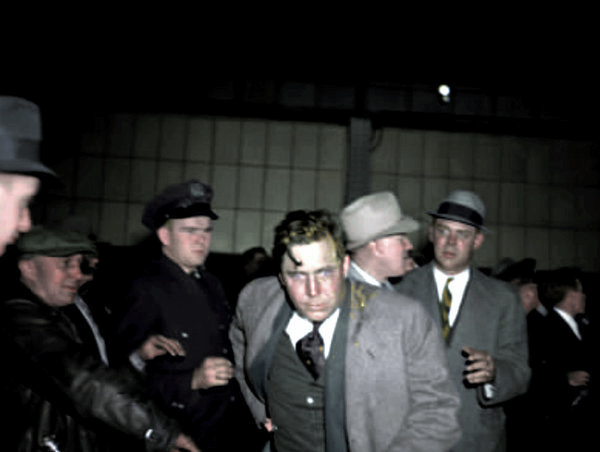 The Republican presidential nominee was bruised on the temple by a missile – reportedly a frozen egg – thrown from the crowd at the LaSalle Street Station as he prepared to leave for New York. An egg thrown at the same time struck Mrs. Willkie in the back and soiled her dress.

Charles Mulrain, 56, unemployed stationary engineer, who said he was a baseball player when he served in the Army in 1907, admitted in Municipal Court today that he threw eggs at the couple and was “sorry to the bottom of my heart.”

I had from four to 10 beers at a tavern across the street and some fellows got to talking about egg-throwing. I don’t know why I did it.

Arraignment on charges of disorderly conduct and assault with a deadly weapon, carrying a maximum penalty of one to 10 years’ imprisonment, was continued until October 25.

Mr. Willkie appeared unruffled and said he was “disturbed only that Mrs. Willkie was hit.”

Al Smith, who unsuccessfully sought the Democratic nomination in 1932 when Mr. Roosevelt first was nominated at Chicago and “took a walk” in 1936 to back Republican Alfred M. Landon, will board Mr. Willkie’s train at Harmon, N.Y., for dinner and a conference on campaign strategy.

Then Mr. Willkie invades the territory of the Democratic organization of Democratic National Chairman Edward J. Flynn to speak at the Bronx Coliseum at 8 p.m. under auspices of the Willkie Clubs and Democrats-For-Willkie.

He has another talk at 9 p.m. at the Manhattan Center, and a nationally broadcast speech from 10:30 p.m. to 11 p.m. before the New York Herald Tribune Forum at the Waldorf-Astoria Hotel. The Forum speech will denounce concentration of power in the New Deal.

Mr. Willkie, in the Chicago Stadium, accused the New Deal of failing to carry out the 1932 platform written there. He discussed that platform point by point, cited what he described as the New Deal record and said:

Mr. Third Term Candidate, when you begin your belated discussion of campaign issues tomorrow night (tonight), tell the American people whether Wendell Willkie is falsifying that part of your record.

He referred to Mr. Roosevelt’s recent announcement that he would deliver five political speeches before the Nov. 5 election to clarify what he said were systematic falsifications of the issues.

This is a strange accusation, coming from him.

From what I have seen of the record, and I have studied it closely, any misstatement of the facts would be a charitable act.

In the history of American politics there is no record like this.

No men purporting to represent the American people have even been so cynical, so callous, so brazen in their disregard for democratic ideals as these men have been.

It was here on this very platform… that the voice of the commissioner of sewers boomed out its cry for a third term… It was here that the name of Thomas Jefferson was booed… Nearly in the 17th Ward headquarters, those self-styled liberals, Harry Hopkins and Harold Ickes, conferred with Boss Kelly-Hague and Flynn – behind bullet-proof windows.

If I am elected President I shall make every effort in my power to see that the un-American road is closed forever by the passage of a Constitutional amendment that will bar for all time another grasp for the absolute power on the part of any future President.

Before coming to Chicago Mr. Willkie toured industrial Lake County, Ind., including the steel-producing towns of Gary, East Chicago and Indiana Harbor, asking the support of workers with a pledge to preserve labor’s social gains, to continue relief and to provide jobs for the idle.

In the third of a series of four question and answer programs, Mr. Willkie, in answer to the question, “What can be done to keep us out of war?”, replied:

There are three things we can do. First: avoid acts of war. Second: make our country a prosperous and unified nation. And third: build our defense so strong, so powerful, that no nation would dare attack us.

In further explanation, Mr. Willkie said that by acts of war he meant "that we should not meddle in affairs that are none of our business.

Earlier he pledge himself to “break up this machine in Chicago” and declared:

After we get elected, there will be some gentlemen who will be taking trips to various parts of the world, and some of them will be confining trips.

If the New Deal deserves re-election because of its experience in foreign affairs, why did not President Roosevelt permit Secretary of State Cordell Hull or others to receive the nomination?

Is it just me or do Roosevelt supporters love throwing eggs at Wilkie.

I don’t know. These guys also threw vegetables and other inanimate objects at him. What’s next, a chainsaw?