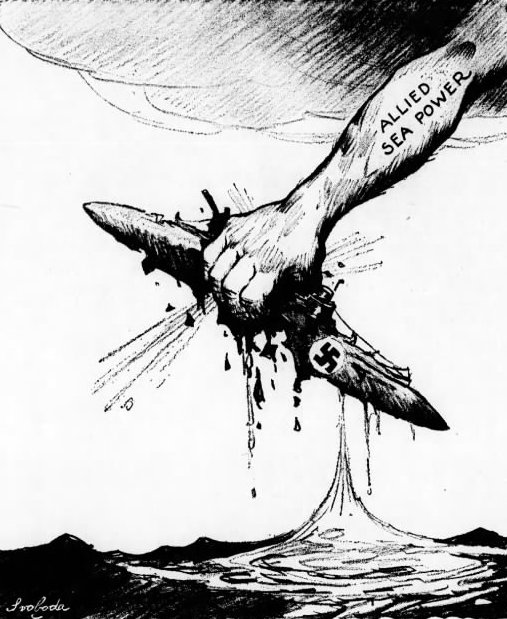 One of the most encouraging recent developments in the war – even during a period when good news has been coming steadily from many fighting fronts – is Prime Minister Churchill’s announcement of the total defeat of enemy submarines in the past 60 days.

Mr. Churchill described it as massacre, said that 30 of these undersea terrors were accounted for in May alone and that in spite of desperate enemy efforts, scarcely a single merchant ship has been sunk since the middle of May. In his opinion, the U-boat menace is being crushed.

It is seldom that a situation is so speedily reversed as the war between the Nazi submarines and the Allied fleets bearing men and supplies across the Atlantic. Only last February, our naval leaders were seriously alarmed over our shipping losses. Even though the fighting was going along well in Russia, North Africa and in the Pacific, Washington and London were issuing warnings that the sinkings might neutralize victories ashore.

We were told of the huge packs of U-boats roaming the seas, that the Nazi building program was progressing so speedily that between 500 and 700 subs would be thrown against our supply lines by spring. Sinkings were described as heavier than those boasted by von Tirpitz in the First World War.

Just what is responsible for the vast improvement in the Allied position at sea has not yet been revealed. Of course, the American shipbuilding campaign is a vital factor. The output of our plants, plus those of the British and Canadians, was somewhere between seven and ten times as much as our losses from enemy action in the month of June.

Larger protective forces, better conceived defensive planning – these and many other factors were doubtless involved. Certainly, it is a tribute to the courage and skill of the officers and men of the American and British Navies. But laymen will naturally speculate as to whether some new anti-submarine device has not finally been perfected and put in successful operation.

As a matter of fact, Churchill’s entire speech was optimistic in tone. He spoke of the success of our air attacks on Nazi targets. He reiterated that there would be no compromise with a defeated Axis. He predicted heavy fighting in the Mediterranean and elsewhere by fall.

Americans will take special satisfaction in the dramatic reiteration of his pledge that Britain will fight on with us in the Far East until total defeat of the Japanese is achieved.