Dm Giangreco interview on the end of the war 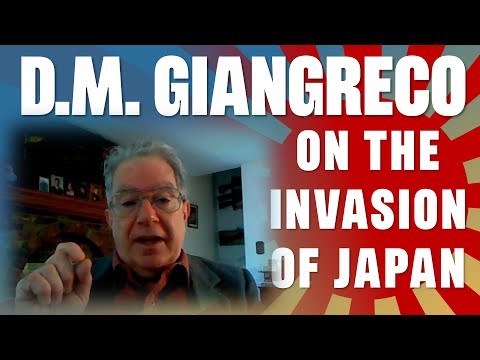 Bernard does the interview and let’s the author talk. Lots of discussion on casualty rates and their impact on policy.

This is indeed a really a very good book and interview because it stays away from alternate history but describes the situation in detail. Very well researched which is very much unknown because the invasion proved unnecessary.

I’m a little late to the party. I had seen this gentleman before but I just bought the book and am reading it now.

This is another direct source, which I posted in another giant source. It was still amazing how much material Japan had at the end of WW2. The whole fake history trope that Japan was ripe for a quick invasion is crap. This is a huge report and as it was made after the war it was not propaganda, just what happened.

Chapter 5: Demobilization and Disarmament of the Japanese Armed Forces (army.mil)

And there is the project Hula, sounds Hawaiian but it was in the Aleutians, I have been to both and there is a slight difference in climate between the 2. I would not advise wearing Hula Skirts in the latter :-). Best deception name EVER! Come to think of it I don’t think I would make anyone happy by wearing a hula skirt

Anyway it shows how the Soviets and Allies worked together on getting the Kuriles. The actual invasion of the Kuriles started after the Japanese gave up and was pretty bloody nevertheless. Sadly a lot of useless deaths.

there is a slight difference in climate between the 2

Quite the understatement there.

I would not advise wearing Hula Skirts in the latter :-).

Vice City in the Aleutians!

Vice City in the Aleutians!

. Watch out the King Crabs

Badass music from my childhood intensifies

Quite the understatement there.

I have some Attu beach condos for sale, want one?

Not at the moment, though I could use some for next year…