The guild claims to have a majority membership of about 900 cartoonists at the studio over the recently-formed independent union, American Society of Screen Cartoonists.

It was decided, according to George E. Bodle, attorney for the guild, to authorize a committee to contact Disney Monday and demand immediate recognition of the guild as the collective bargaining agency for the artists.

An emergency meeting will be held at 8 p.m. Monday to hear a report from this committee and further action will be decided then, Bodle said.

The guild has announced that it will strike to compel recognition.

Inasmuch as both unions claim majorities, Disney has declared that whichever establishes its claim, he will recognize.

Walter P. Spreckels, director of the board, said:

Mr. Disney would like the National Labor Relations Board to hold an election to ascertain which of the two he should accept as collective bargaining agent. It is all right with Disney if the ballot reads merely whether or not the cartoonists wish the guild.

Hollywood –
Walt Disney’s cartoons won’t be quite so animated tomorrow, says the Screen Cartoonist’s Guild. The AFL union last night to strike at Disney’s studio to support its demand for recognition. It claims to represent 85% of his employees.

DISNEY STUDIO PICKET LINE MAY INCLUDE ALL HOUSES SHOWING CARTOONS
Guild claims majority of chew signed
…
Studio declares minority out, refuses to bargain until formal election held
…
Hollywood, May 28 (UP) –
American Federation of Labor officials today threatened to picket every theater showing Walt Disney films in a further effort to back up the strike of 450 cartoonists who demand that Disney recognize the Screen Cartoonist’s Guild (AFL) as their collective bargaining agent.

The guild called a strike at 6 a.m. today and union officials estimated that 450 of the studio’s 700 cartoonists were marching in the picket line.

The studio announced, however, that only 309 of Its entire personnel of 1,214 had failed to report to work. All cameramen, musicians and film cutters are at work as usual, a company spokesman said.

Police said no acts of violence had been reported when groups of non-striking employees entered the building to continue work on three films now in production.

George Bodle, attorney for the guild, said additional pressure in the form of a boycott would be brought to bear on the studios by placing the company’s productions on the AFL “unfair list.”

Unless the Screen Cartoonist’s Guild is recognized and five union officials reinstated, picket lines will be established in front of every theater showing Disney films.

He charged that the five officials of the guild were discharged because of union activity.

Bodle predicted the studio would close by the end of the day because of labor shortage.

The studio remained open, despite the picket line, and Disney said he would provide “adequate” protection to all who wanted to continue working.

The strike was expected to hamper production of three cartoon movies now being made.

Walter B. Spreckels, former regional director of the National Labor Relations Board who now is labor relations counselor for the studio, said Disney would not capitulate nor make any overtures toward stopping the strike.

We want the labor board to determine the bargaining agent by an authorized election. Mr. Disney is willing to recognize any union that can win an election.

The guild charged that Disney refused to recognize a labor board order to negotiate with the guild and cease relations with the American Society of Screen Cartoonists, an independent union which the guild claims is dominated by Disney.

Disney promised “full and adequate protection” to all employes who wish to continue working. He said the studios would remain open and that he would supplement authorities with “whatever numbers may be necessary to provide protection.”

Herb Sorrell, organizer of the guild, said a labor board hearing had just concluded which outlawed the independent Society of Screen Cartoonists. He claimed therefore no election need be held because:

…we already have a clear majority.

CARTOONISTS ON STRIKE AT DISNEY’S STUDIOS

Hollywood, May 28 –
Cartoonists for Walt Disney Productions struck today in an effort to force Disney recognize the Screen Cartoonists Guild (AFL) as their bargaining agent and sever relations with an independent union.

A picket line was established but the studio remained open and Disney said he would provide “adequate” protection to all who wanted to continue working. The strike was expected to hamper production of three cartoon movies now being made.

PICTURES FROM THE STRIKE: 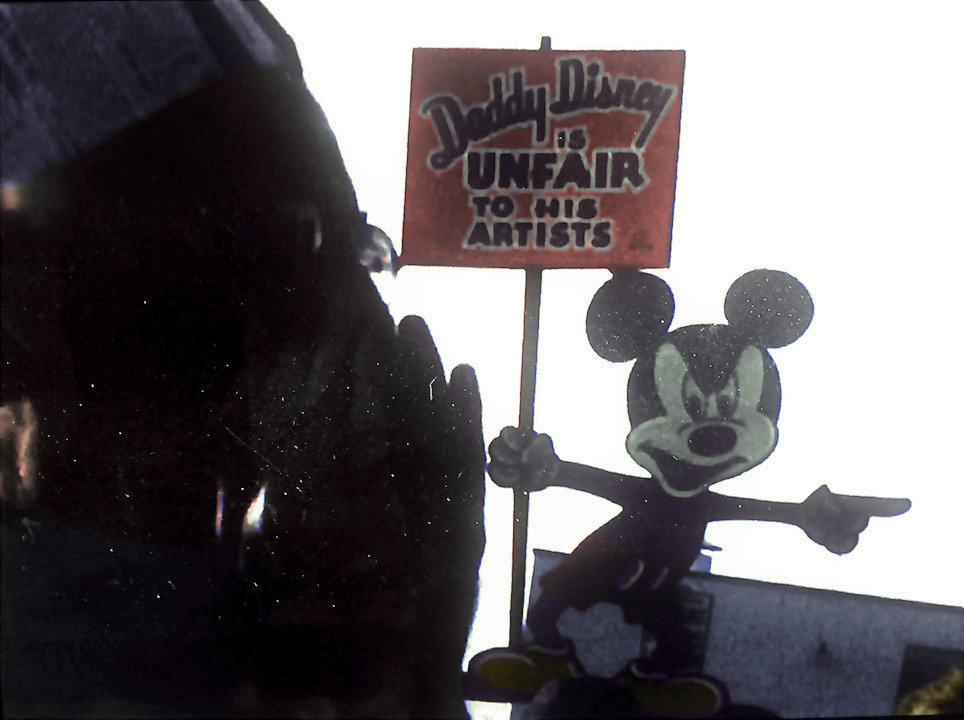 Regardless of whether you agree with why they were striking or not, I think we can all agree that the Disney strikers had the best looking protest signs. 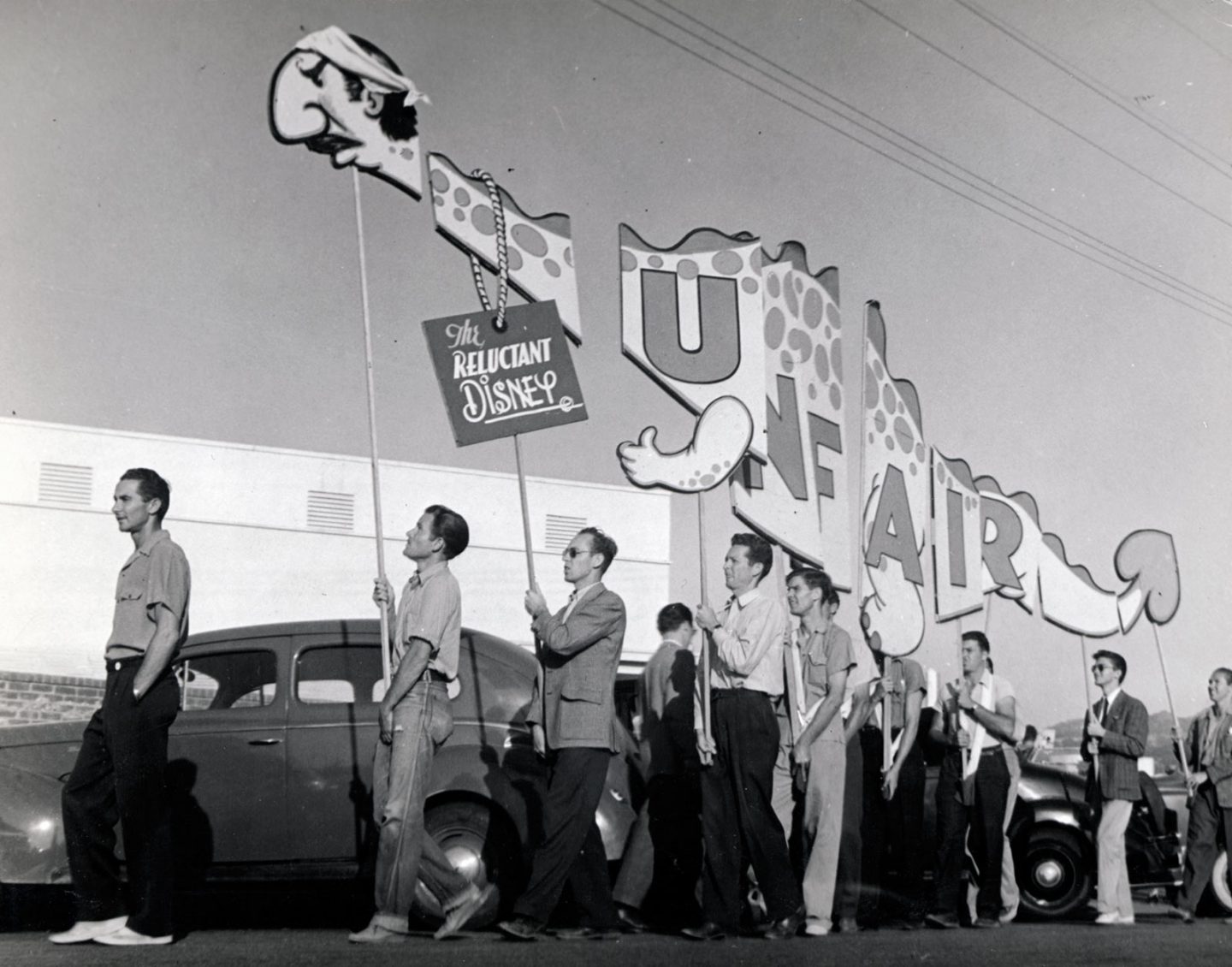 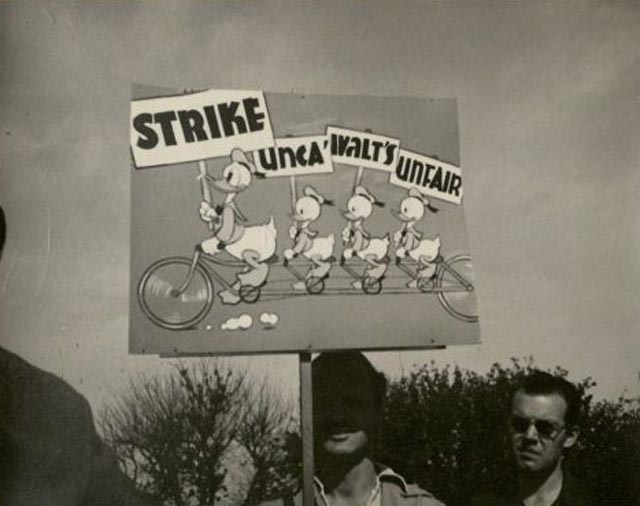 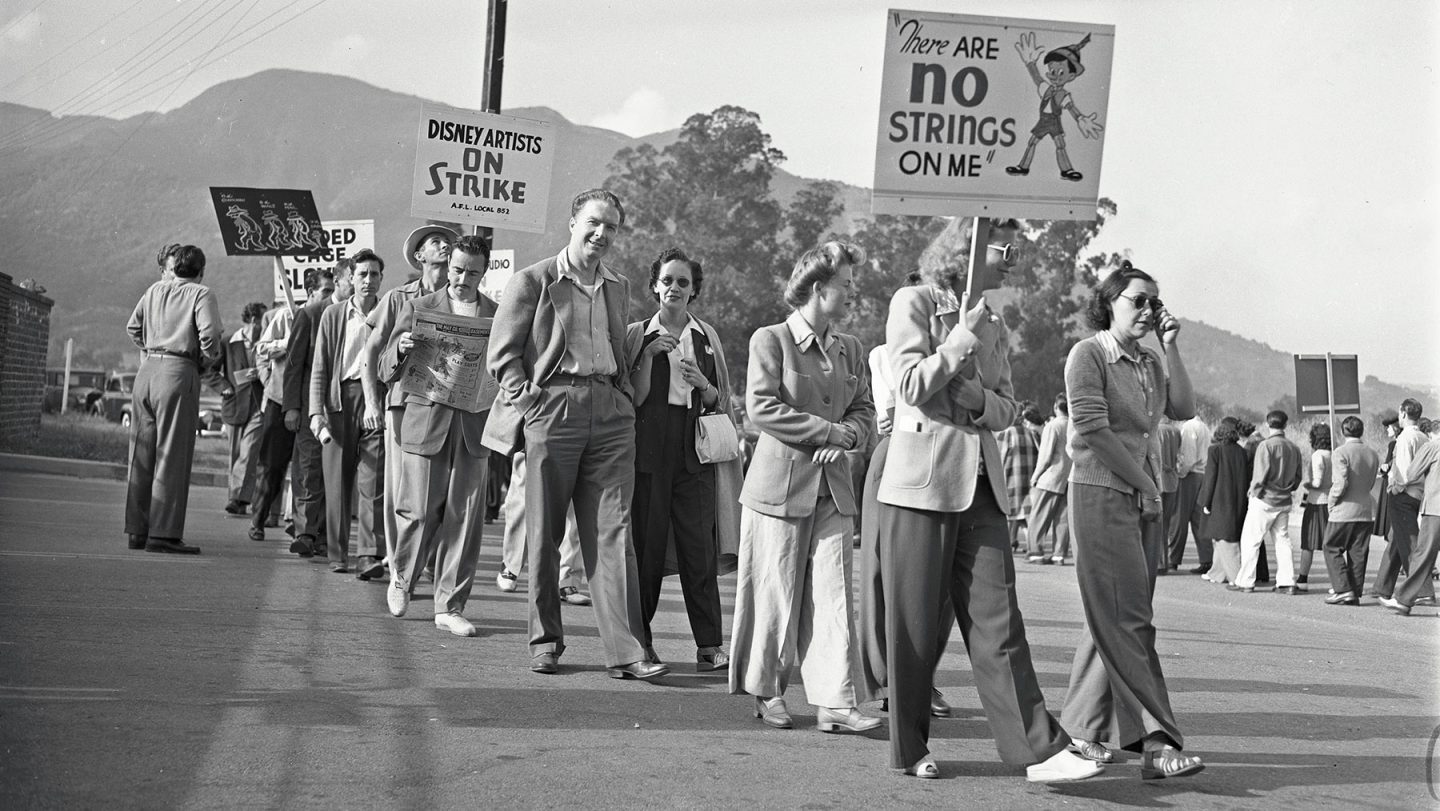 These protest signs are cool,

I suspect future leaders of Disney will run the risk of appearing in Disney Cartoons as well. Don’t mess with cartoonists.

Washington, Sept. 10 –
James F. Dewey, U.S. labor conciliator, announced today that a formula had been worked out for rehiring workers at the Walt Disney Studios in Hollywood and that the plants will resume operations Monday.