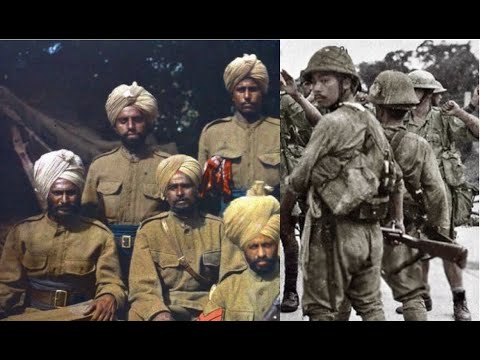 The reason why the British only recruited from mostly from the Punjab Province (which was mix of Sikhs and Muslims) as in 1857 Mutiny, the Bengalis had switched sides and fought the British, the Punjabis stayed loyal.

In his book Partition, Barney white spunner, mentions that the INA were an ineffective military force and the allied information would estimate that a brigade of INA troops of approximately 5000 men were as effective as a japanese company of 70 men.

Also from the same book he mentions that early recruits in the INA had to swore an oath of Loyalty to Bose based on that of the Waffen SS. The INA also recruited women much to the consternation of the Japanese.

Also from an account of a tour guide when I visited the Adamans jail (called Kala pani (literally meaning - Black water) (I am telling this from memory, so don’t take it for granted).
When the japanese occupied the islands, they freed the prisoners and they feed them. Took them out for some “work”, but since the prisoners could not know where they were going, there heads were drapped with a black cloth. They were then put around a big hole in the ground and were shot with the cloths still on their heads. … Unfortunately, he didn’t tell us where the site was… so… he could be making it up for all I know.

Japanese ground operations during WW2 were repeatedly characterized by a terrible neglect of logistics that destroyed their soldiers will and ability to fight. Logistics simply didn’t carry the elan of actually fighting and hence it was often badly neglected. The most egregious example is the under-supply of the Japanese forces sent to attack Imphal, but I draw readers’ attention to the documentary by Kazuo Hara called “The Emperor’s Naked Army Marches On”. This details the failure of Japanese supply in New Guinea and its horrific consequences for troops and the people of New Guinea, as told by those who suffered through it and somehow survived the war. It is a very controversial documentary, for reasons you will come to understand when you watch it, as it ends with an attempted murder.