So you think women don’t know how to fight, huh?

When you say that, brother, be sure you’ve got a shillelagh behind your back, a sturdy set of brass knuckles in your pocket, and heavy spikes on your shoes. Take it from me, partner, you’ll need 'em! 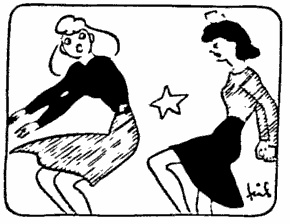 Although the female is reputedly the more deadly species, her tactics are forever being slandered. An angry woman, it is said, pulls hair and scratches, methods not included in the manly art of self-defense. Or else she breaks down and cries, which is called a low-down, mean, good-for-nothing way of getting what she wants.

Anyone having such ideas about the ways of angry women would have a greatly altered viewpoint after an evening at the Roller Derby. One of the screwiest of entertainments by its very nature, it offers a plan and fancy assortment of fisticuffs thrown in for good measure. Watching it reminded me somehow of the days when James Cagney shocked the movie millions by socking his cinematic girlfriend in the face with a grapefruit.

There was nothing sissified about the fights going on around that track (one on the average of every three minutes). When a girl decided she was being shoved around just a little bit too much, she would throw off her helmet and pitch in with a will.

The usual procedure was to tackle the opponent, pin her flat on her back and start pummeling her face with both fists. Not Queensberry, perhaps – but definitely effective. A milder spurt of anger called for booting the enemy from the rear with a well-aimed knee, a move calculated to disrupt the best of equilibriums (or is it equilibria?).

Beside the feminine outbursts, the flare-ups of the men skaters looked very tame. They would sock each other in a half-hearted manner and then practically jump into the referee’s arms so they wouldn’t have to keep up the fight. One had a cute little trick all his own which consisted in tripping the other fellow and then grinding a heavy skate into the small of his back. The good Marquess of Queensberry, I feel, sure would turn over in his grave at that one.

Whether the girls were really as mad as they seemed is, of course, questionable. But they certainly put on a darn good act.

Everybody sat up and gasped when Rosalind Russell and Paulette Goddard had their memorable set-to in The Women. This match, however, featured the supposedly typical hair-pulling and scratching maneuvers. It was small potatoes compared to what can be done, but absorbing because of its novelty.

It is usually to a woman’s best interest not to fight, no matter how mad she gets. Men may look purposeful when angry, with a flash of the eye and a flare of the nostril as the fist is clenched, which are all quite impressive. Women are more likely to screw up their faces hysterically and look like boobs. 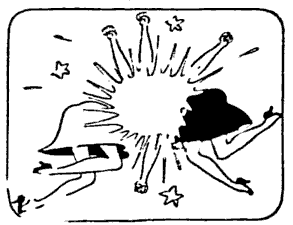 No one ever sympathizes with a lady who has a good left. The sympathy – and therefore the help – is all with the soft-spoken little darling who wouldn’t know a hay-maker from a hay fork.

Ladies, if they are smart, stay out of fights. But I’ve a strong hunch that if worst came to worst – or if the barriers of polite society were lowered – they could take care of themselves in a scrap with twice their weight in wildcats.

I forget who said it, maybe Gene LeBell(Ronda Rousey’s grappling coach,) but he said that WW2 was a major turning point for women’s combat sports because women in resistance groups had to learn to fight. We’d definitely see that with the development of Krav Maga.

Any links to the source? Greatly appreciate it.

This article was a rather humorous take on women fighting hand-to-hand. What did you think of it?

I thought the article, in hindsight, was incredibly ironic because women really were learning hand-to-hand fighting in resistance movements in Europe. I don’t know if there’s a rhetorical term for it; it’s satire that accidentally conveys reality.

One thing about podcasts is that, if they’re not transcribed, it’s tough to trace people’s words, so I can’t find where Gene LeBell said that right now. However, I found this, and a bunch of other sources, on women SOE agents learning hand-to-hand combat:

I would say “Funny Aneurysm”, but:

Speaking of satire, this will premiere in New York Tuesday. 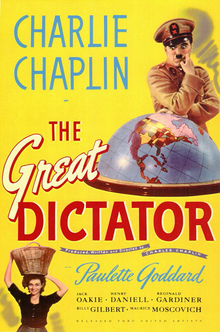 I’m not a fan of the TV Tropes site.

To each his own, but since worldbuilding is another hobby of mine, I find it helpful.