In the recent suit for divorce brought by movie actress Greer Garson, testimony showed that she had left her husband, Edward A. A. Snelson, British government attaché, five weeks after their marriage because she didn’t want to go with him to India.

Miss Garson is an exquisite actress, and Mr. Snelson’s gain would have been the public’s loss. Moreover, the handling of her life is her own affair. But in that piece of testimony lies a strong indication of what is wrong with marriage today. 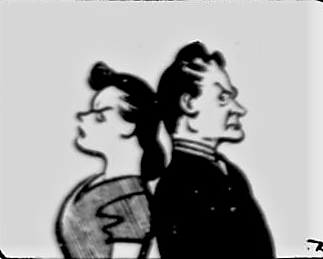 We have forgotten the meaning of the word “compromise.” We think it signifies weakness, inability to stand up for one’s rights and general loss of face. Too many couples who enter into marriage think that modern individualism gives them the right to go on acting exactly as they did before marriage, with special emphasis in selfish considerations.

This is not meant to be a preachment on the hoary topic, “Woman’s place is in the kitchen.” This column has always championed the right of a woman to think and act for herself, in preference to becoming some man’s echo. It will continue to do so.

Marriage can never be an example of the irresistible force which meets the immovable object with no damage done. Elementary science tells us that the inevitable result of such a meeting is spontaneous combustion.

There probably never was a successful marriage which did not owe much of its success to compromise. By its very nature, marriage is compromise. Ideally, it is two people united to live as one, two people making a single life together.

A man who is an habitual drunkard cannot be a good husband. He cannot be responsible, reliable or easy to get along with. He cannot fulfill his duty as head of a household, or be a pleasant companion.

Neither can a woman who refuses to adjust herself to the demands of her husband’s life be a successful wife. When she marries, she accepts a man’s name and puts in his hands the responsibility of her well-being.

No cause for career

Ordinarily, there is no reason for her to discontinue an independent career. She doesn’t have to be tied to the kitchen to be a good wife. Even women with children have proved themselves capable of going on with careers without harm to their marriages.

But suppose it becomes a choice between the husband’s career and the wife’s. In order to go ahead with his work, he has to move to a distant city, even another country. He has to make a change in routine that will eliminate, at least temporarily, his wife’s own career. What should she do? 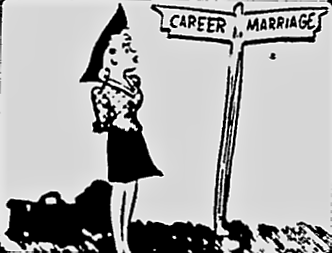 That depends entirely on what she wants in life. If she insists on her own “rights,” she ends their marriage then and there. It is something she should have considered before she married, really.

A woman who marries and then complains that her husband’s way of life in itself “stifles” her own individuality doesn’t make out too good a case for herself. A man who, out of sheer prejudice or stubbornness, insists that his wife shall pay no attention to anything or anyone but him is equally short-sighted.

When people learn to think about such things before marriage, to accept the need for compromise and to learn when self-reliance becomes mere vanity and selfishness, there may not be so many short-term marriages.