Although usually one who can take statistics in stride, if I have to take them at all, I have run across one little summary which gave me quite a jolt.

Between 1880 and 1930, the number of women gainfully employed in America rose from 3 million to 11 million. That, anyone will admit, is quite a rise. On that increase has been based much of the talk about woman’s new place in the world, feminine emancipation and the way working women today snatch the bread out of the mouths of jobless men.

But during the same period, the number of American men workers went from 14 million to 38 million. The total increase, then, is more one of population than of relative influence.

For – and here is the stinger – while in 1880 there were 15 women among every 100 workers, in 1930 there were 22 among each 100. Instead of comprising less than one-fifth of the working population, women now comprise less than one-fourth.

The boys who complain about women’s aggressiveness and cupidity are simply going to have to find something else on which to blame the ills of the world.

The charge has been made in all seriousness, too.

If women had stayed home where they belonged, we are told, the world would not be in this present mess.

But, no, they shrieked until they got the vote. They stormed the citadels of business until they’d turned economics upside down. They kept on working even after they were married, until the home became a thing of the past. They usurped the privileges of men until war became inevitable (and please don’t ask the reasoning behind that fine little non sequitur). 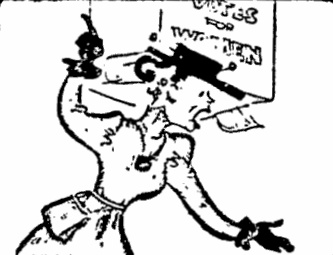 Basis for the quarrel

Yet it seems that there are almost as many women sitting home tending to their knitting today as there were in 1880.

If there is any basis for the quarrel – from the masculine side, I mean – it is that women do have a wider sphere today. They are better educated, more articulate. There is nothing to keep them from becoming doctors, business executives, architects or anything their little hearts desire if they’ve the intestinal fortitude to stand the gaff women receive in such fields. They are not limited to sewing, teaching, housework and the similar “genteel” occupations which were woman’s lot in 1880.

If women are guilty of anything on this score, it is that they have not taken full advantage of the indubitably wider opportunities offered them. With a whole new world of interest, knowledge, occupations and avocations spread out before them, all too many have shunned the increased responsibility that goes along with such things.

We’re all in same fix

And as far as blaming the condition of the world today on either sex, the sober fact is that we are all of us in this thing together. Neither side can say, “Well, it isn’t our fault,” and sit back placidly waiting for the other side to clean up the mess.

From domestic quarrels to international conflict, each party is likely to waste a great deal of its time thinking up ways to blame the trouble on the other party. No one yet has been able to set forth clearly whether Eve in listening to the snake or Adam in listening to Eve should bear more of the blame for man’s expulsion from the Garden of Eden, and the point can still get a good argument. 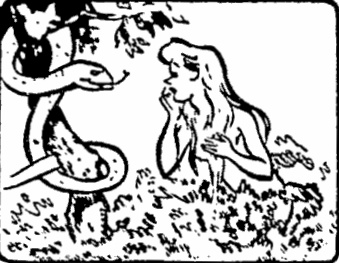 Eight million more women are gainfully employed today than in 1880, and 24 million more men. When we can say that that many more of each sex are working together to bring order out of our present chaos, then we’ll really have something worth raving about.