Faced with the problem of textile shortages as a result of the national emergency, the National Women’s Undergarment Manufacturers’ Association last week recommended shortening women’s skirts by several inches. Such a measure, it was said, would save “at least 10%” of the millions of yards of fabric used annually for clothing.

Before the gentlemen climb on that particular bandwagon, I ask them to take a quick look around at any street scene. In case they hadn’t noticed, women’s skirts have already been lopped off almost as much as the law allows.

It isn’t as if we were wearing voluminous ankle-length skirts with 10 petticoats underneath, you know. In that case, the lopping could continue merrily. But start lopping our already brief garments and there’s no telling what Will Hays would say. 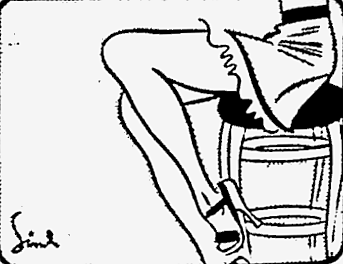 There will probably be methods of saving fabric equally patriotic and effective, and not nearly so demoralizing. Such as having smaller wardrobes and less variety in the types of outfits worn, a system the English have adopted.

In England, women have virtually abandoned two types of outfits, the fussy afternoon dress and the extremely décolleté evening gown. Women who used to spend long afternoons playing bridge, dressed to the hilt, now spend their days at work, where afternoon dresses would be silly. When they play bridge, it is in the evening.

There is little emphasis on highly formal life, so there is no need for décolleté evening gowns. Instead, women wear dinner dresses with long sleeves and high necklines for their rare festivities.

For the most part, they wear tailored suits made of men’s wear fabrics but lighter in weight. They retain color and chic in these suits, but they lay emphasis as never before on practicality.

When I say further abbreviated garments over here might prove “demoralizing,” I use the words advisedly. If skirts just clear the knees, as they did in the Twirpy Twenties, they are the most unflattering garments a woman could wear. 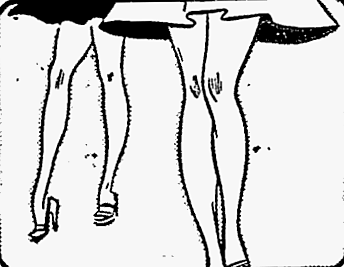 And morale goes down

The line of the knee, emphasized by a straight line of fabric, is most unpretty. The woman hampered by such a silhouette realizes it perfectly well, and is apt to feel too miserable to keep her mind on her work. The man who sees the silhouette wonders whatever happened to women that they suddenly became so homely, and feels dejected at the prospect of all these homely women around. Ergo, down goes morale all around.

Cut skirts ever shorter and what do you have? A bunch of bloomin’ chorus girls, that’s what. That’s fun, all right. It’s too much fun. The gentleman in the sixth row aisle seat forgets all his worries looking at the cute little pony on the end of the chorus line. He won’t do much concentrating if she moves into his office, costume and all.

Ballet skirts are entirely too distracting for everyday matters. If the stocking shortage becomes a total lack of stockings, we would have girls running around in flippant, very short skirts and bare legs – and where, I ask you, would that get serious-minded workers?

Beside that, winter’s coming on. I don’t know how you feel about it, but I’m pretty sure that if skirts were six or seven inches shorter and north winds were blowing, I’d just have to make up the difference with leggings of nice, warm 100% wool – and any great trend in that direction would certainly stymie the economy move of shorter skirts.