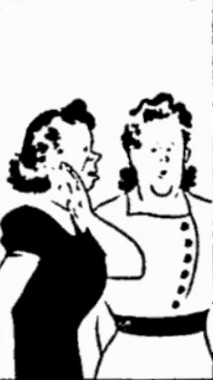 Well, the rumors finally came out in the open. Perhaps that’s the healthiest place for them.

Rumors flourish when passed around in whispers. They thrive behind that immortal gesture of the gossip-hand half-covering the mouth, while the chin wags furiously. They flower in the dank near-darkness of being kept undercover.

This particular set grew to alarming proportions. When last heard from, the rumor-mongers were taking their oath that a whole shipload of WAACs had been returned from Africa because they were pregnant. The number reported had reached around thousand.

Silly of course. The sort of thing no one actually believes, but loves to repeat. Give them a good strong argument when they tell you such things, and they’ll start to back down. Listen to them, and they make the story better as they go.

In this instance, the facts, as attested to by a WAAC officer at headquarters in New York, are that only about 300 WAACs altogether have been sent to Africa. Of them, exactly three have returned to this country – one because she was pregnant (she’s the wife of an Army officer, and didn’t know about her condition until after she was shipped), and the other two because of illness.

Another rumor had it that Gen. Eisenhower considered the WAACs more trouble than they are worth.

The truth is that Gen. Eisenhower denies any such statement emphatically, and said so in writing to Col. Hobby. More than that, he has asked for three or four times as many as he has now.

And yet, absurd as they seem when you look at them calmly, these stories spread all over the country.

I strongly doubt if anybody actually and honestly believed them.

I think they spread because of several factors. There are people, not true Americans certainly, to whose advantage it is to spread any story they can cook up which will set one body of the people against another, which will put any large and well-known group in disrepute. 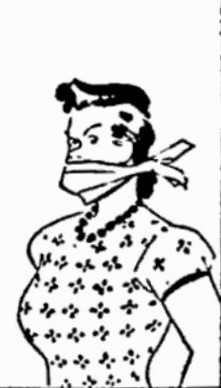 There are other persons who simply roll their tongues over the thought of immortality. They enjoy accusing others of living in sin, and do so at every opportunity. The mere idea of women in the armed service is a glorious opportunity to this group.

And then there are simply those persons who pass on, just as a matter of course, every “spicy” thing they hear, say they don’t mean any harm. Maybe they don’t.

But the net result has been to malign and falsely accuse, by implication, every girl who’s had the spunk to sign up for one of the most self-sacrificing of duration jobs.

If only the gossips who started all this could be aired and dried out as thoroughly as can the juicy rumors they started, maybe we could really get somewhere in keeping such stories from spreading.

My wife’s mind when seeing this: