The dulcet tones of the soap program announcer pulsated across the airwaves. He queried:

Do you, too, want to have a lovely, man-tempting skin?

At that point, I became – to quote Mr. Lucius Beebe – sick in my hat. Or would have, had there been a hat handy.

This passion for purple prose has got to stop somewhere, and that little sample is as good a place as any to end it all, and better than most. 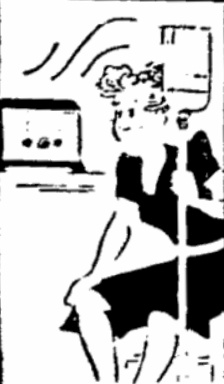 Maybe women do want “man-tempting skins,” if by that loathsome phrase is meant clear, bright complexions. But any woman who would express, or even think, her desire in such language should have her head examined. I think it’s an insult to women to appeal to them in such terms.

It’s also an insult to men to presume that such an item as a “man-tempting skin” is enough to make them fall madly in love on the spot, overlooking all possible flaws of character and any temperamental differences, ready if needs be to leave home, family and friends and follow the will-o’-the-wisp of a man-tempting skin.

Because that is precisely the implication.

Any woman wants to be attractive, if only to be able to face her mirror without flinching. To make herself more attractive to men is undoubtedly one of the aims of her grooming and primping, and from Cleopatra to Hedy Lamarr, such care has been a help.

But the distortion of such a phrase as “man-tempting skin” is a rank injustice all the way around. And that’s only one of many equally distasteful mistreatments of the language in vogue these days.

It’s enough to make a woman vow never to wash her face again, never to have a manicure, never to use comb or lipstick, never to dab perfume behind her ears (shades of Westbrook Pegler!). 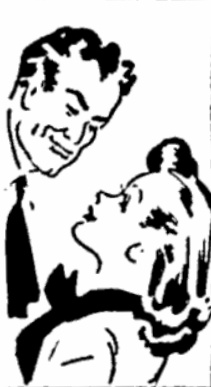 And it’s enough to make men swear off women entirely. Any self-respecting male would be likely to lay down the law to himself:

Just what sort of sucker do they think I am? “Man-tempting skin,” indeed! Well, there’s one man that won’t be tempted.

In fact, I henceforth refuse to be a guinea pig for any cosmetic treatment undertaken by any fair lady. I shall wear dark glasses so dark that I can’t see through them at all, and judge any woman solely by whether or not I like the sound of her voice.

Things have come to a pretty pass when it is generally accepted that the only way to appeal to a woman at all, whether you want to sell her scouring powder or a subscription to a magazine, is to promise her that she will promptly become irresistible to all men.