It seems that the radio boys can talk through their hats just as well as they can over the mike.

Pat Kelly, overseer of announcers for NBC, delivered himself of the opinion that as far as radio opportunities for women are concerned:

In his judgment, women lack vocal quality, endurance, versatility and physical prowess (If you’re wondering where that last comes in, it seems that announcers on the job late hours in the nightspots have to keep drunks away from the mike, in addition to their other duties).

This much we can grant Mr. Kelly: The average woman’s voice over the radio is something to be shuddered at – high-pitched, strained and artificial. But that goes for just about any average American voice, our standards of diction being lower than the basso’s choking “Sailor, beware!” 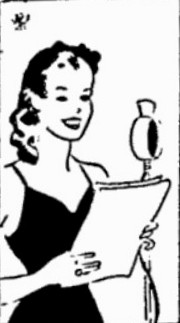 But I take it that Mr. Kelly isn’t talking about the average voice. He’s speaking of the trained feminine voice as against the trained masculine voice.

No vocal quality? Did he ever hear Katharine Cornell, Helen Hayes or Lynn Fontanne?

No endurance? Did he ever hear of Gertrude Lawrence, on the stage for almost three solid hours in Lady in the Dark? Or the aforementioned Miss Hayes, playing the several ages of Queen Victoria for several years straight?

No versatility? Did he ever catch Audrey Christie with her nasal, twangy “Likewise, I’m sure,” on Duffy’s Tavern, and then hear her crisp and utterly different delivery in Keeper of the Flame?

No, Mr. Kelly, these ladies are not commercial announcers. We haven’t had much of a chance so far to judge ladies in that capacity – but feminine voices are definitely not what you say.

As for comparing a woman’s ability as an announcer with that of a man, whoever said that the men set a standard worth comparing anything with? 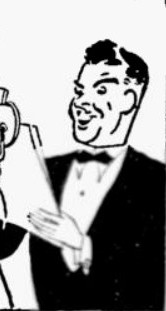 Do you mean we’re supposed to regard that pompous, pseudo-cathedral tone as ideal? Is that artificially hearty, condescending “let’s get chummy” voice to be emulated? Does it denote versatility to be able to giggle fatuously at a comedian’s joke, switch off the hollow laugh, and leap vocally into the soothing syrup of a subtly (?) introduced commercial?

If those are the things Mr. Kelly wants, he may be quite right in saying that women can’t deliver the goods. Or, rather, that they just wouldn’t put up with it. They’d probably change things around a bit in ten minutes flat.

And that might not be a bad idea at all.