A little story about a woman Air Raid Precautions warden made the wire services recently. The 30-year-old woman, Mrs. Jean Findlay, is the only district warden of her sex and is virtually a dictator over one area.

In her care are 54,000 people, and most of the 800 wardens under her are men. One of them is her husband a voluntary warden in that area.

About being her husband’s boss, she said:

I give him orders, but, of course, indirectly. You can appreciate that this state of affairs does not exist in the home.

If only more people everywhere could say that such a “state of affairs does not exist in the home!” I say “people,” not just “women,” because one of the chief troubles with homes seems to be that too many want to be boss and no one wants merely to cooperate. 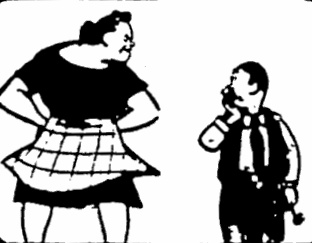 The desire to keep someone else under your thumb may be an elemental part of the human make-up, for all I know. Maybe it can’t be stamped out. Maybe it is essential to ego or something that a person be able to boss someone else around.

If there weren’t so many people around who seem able to get along quite well without being obnoxious about having the last word, I’d be more inclined to accept such a theory.

Some girls get advice

Some girls have been advised by their mothers to let a husband know who’s boss from the minute they step foot in their home. With them, it’s:

Wipe your feet on the mat, Junius… Don’t smoke your pipe in the living room… Put the cap back on the toothpaste… Get me a dozen eggs at the store… Don’t ever have those horrible poker-playing friends of yours in this house again… Don’t you dare open that pay envelope before you bring it home to me.

That sort of thing turns a man into a wife-beater, a drunkard or a poor hen-pecked husband.

With her children, such a woman employs the same heavy-handed tactics.

Blow your nose… Study your arithmetic… Don’t talk to that Jones boy… You can’t go to the movies… Don’t sass me… Quit acting sulky… Don’t go squawking to your father… Why, officer, you can’t take my boy to a reform school!

There are men who like to play the dominant male. Such a one believes that wives should be seen and not heard, and shushes her when she opens her mouth in company. He doles out a meager pittance of household money and demands an accounting of every penny. His theme song, if he could sing, would be, “A woman’s place is in the kitchen.” 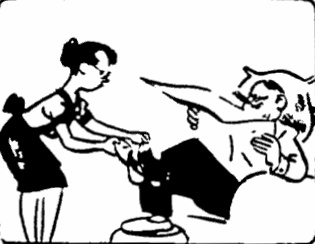 I grant you that these are extremes, but they illustrate the point. Some people think they have to yell louder than anyone else in their immediate neighborhood, to establish their own superiority.

A family needs a leader, just as any organization does. But the leader need not be a servant. It would seem that a division of responsibility here would be the logical approach, and that two people might find more peace and general contentment in working together than in having one be the complete ruler.

I have my doubts if either the man who says, “I’ll show you who’s boss around here,” and proceeds to be as demanding as possible, or the women who tried to order her husband out of his right mind actually gets a great deal of satisfaction out of life. I am sure that people who don’t work so hard at being dominant have less trouble with their blood pressure.