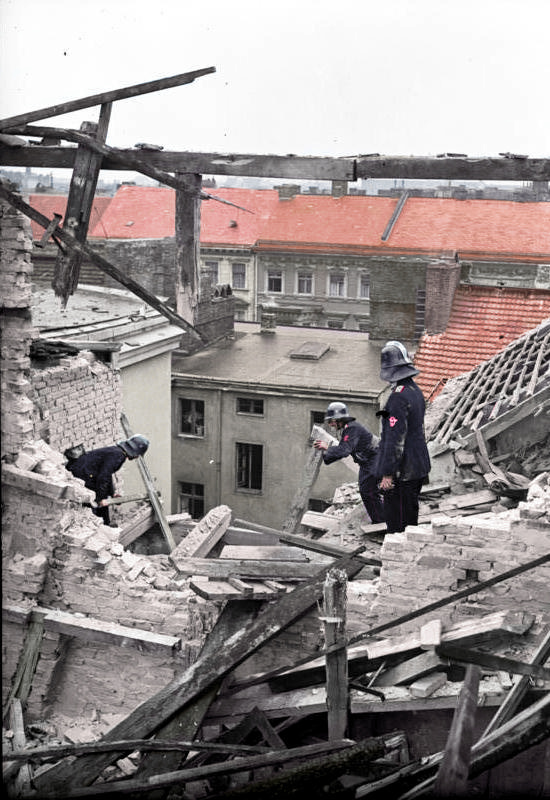 German planes smashed back at Great Britain today with mass air attacks in Kent County a few hours after British war planes roared over Berlin for the first time in the war, and dropped several bombs on outskirts of the capital.

The official DNB news agency said heavy air fighting was going on over Kent, the British county that extends from Dover in the southeast up toward London.

German bombers were attacking airdromes of the Royal Air Corps, DNB said, while fighter planes engaged large numbers of British defenders and shot many of them down.

British planes were reported shot down in attacks on Deal, Folkestone, Canterbury and Cambridge, the agency said. Other air battles were fought over the English Channel.

British anti-aircraft fire was described as weak and efforts to impede the German attacks by use of barrage balloons were said to have failed.

DNB claimed that the British were suffering losses in the ratio of five British planes top one German, whereas the ratio formerly had been four to one.

The High Command also said that German bombing attacks on Great Britain had caused great destruction two aircraft and arms factories in the Birmingham, Kingston and Coventry areas of England.

The communiqué added that German U-boat and air attacks had sunk more than 80,000 tons of British shipping, and that mines had been laid again off British harbors.

During the night, enemy planes for the first time since the beginning of the war flew over Berlin and dropped several incendiary bombs on the city outskirts.

In the remainder of Reich territory at different points, bombs were dropped aimlessly and fell on non-military objectives. Neither here nor in Berlin was damage caused. One of the planes which flew over Berlin was downed by anti-aircraft guns on its return flight.

In London, the British Air Ministry said the RAF planes had bombed arms factories near Berlin.

It was learned that British planes also raided Leipzig where the big annual fair is being held, compelling thousands of visitors to seek refuge in crowded cellars for about an hour.

It was learned that a number of dud anti-aircraft shells fell in Berlin streets and apartment house courts during the night injuring several persons.

The British yesterday lost 72 planes, including 521 downed in air battles and 21 by anti-aircraft guns or destroyed on the ground, the High Command said. Fourteen German planes were reported missing.

The communiqué said that a German plane sank a merchant ship of 4,000 tons about 200 miles west of Lands End, England, which would indicate a Nazi air patrol over the Atlantic Ocean.

The British raid on Berlin during the night lasted three hours and the raiders dropped propanganda leaflets on various districts.

The leaflets stated that Germany was gripped in a stranglehold by the British blockade and was threatened with monetary inflation.

Claiming that the British Navy dominated the seas and the RAF held mastery of the skies, the leaflets asserted “the German people must have lost its mind to allow itself to prosecute a war against such overwhelming power.”

The official news agency said that the only damage was to one shack which was ignited.

One incendiary bomb dropped in a flower nursery in a Berlin suburb.

Planes were heard over Adolf Hitler’s Chancellery, the Foreign Ministry, the Propaganda Ministry and other government buildings.

Anti-aircraft batteries on top of these buildings, and batteries all over the city, fired furiously. The roar of anti-aircraft gunfire was punctuated by occasional heavy explosions which veterans of air raids on other countries believed to be the result of bombs.

United Press correspondents watching from windows of the United Press offices and from homes in the West End, heard violent detonations from the west and north during an almost uninterrupted crescendo of fire for a half hour.

The alarm was Berlin’s fifth since the war started and the third since intensified air war was started against Britain June 18. This alarm period was far longer than any previous one and gave Berliners their first experience with planes over the city, tracer bullets and searchlight beams trying to pierce the clouds and anti-aircraft batteries firing from many places.

The air raid alarm was sounded at 12:20 a.m. (6:20 p.m. EST). During the first 10 minutes, 10 heavy explosions, the reverberations of which could be felt in mid-Berlin, were heard from the north and west parts of the city.

The sky was completely overcast and the night was black. At this period of the alarm no airplanes could be heard and there was no gunfire. Pedestrians went leisurely to shelters in the Unter Den Linden section, the center of the city.

The rumble of anti-aircraft guns of all size became heavier, interspersed by bigger explosions. It seemed that the heavy explosions, apparently from bombs, came principally from northern Berlin at a point about 2.5 miles from the center of the city. The heavy explosions could be heard occasionally also from the West End of the city, and these, too, seemed to be from bombs.

Dana Schmidt and Alec Dreier of the United Press staff were able to take turns watching from the office windows and, groping for the keys in the dark, send out a low-by-blow story on a tele-printer machine for transmission to the United States.

At 1 a.m., two airplanes could be heard over the government quarter and anti-aircraft gunfire was intensified.

At 1:15, the rumble of anti-aircraft fire from north, west and east Berlin became heavier.

Anti-aircraft fire broke out directly outside the United Press office. It spread to dozens of batteries all over the mid-town area. Flashes from the guns were blinding.

The thick network of batteries around the Chancellery and other government buildings fired fast as two planes were heard directly over them.

At 2:00, as church bells tolled the hour overt a city that seemed dead, anti-aircraft fire had subsided and only an occasional explosion could be heard. But five minutes later, several planes droned over the middle of the city and anti-aircraft gunfire broke out in all directions.

At 2:15, the fire subsided, only to burst out at 2:28 in northern Berlin as a motor was heard overhead. The fire spread to the center of the city, then to the southwest, and died.

The heaviest fire of the raid started at 2:40 and at least two planes were heard over mid-Berlin. The all clear came at 3:21.

Was this mostly a psychological ploy by the British to show the Germans that they were still very much in the fight?

Yes. Especially considering that the Nazi leadership thought of Berlin as an impenetrable city for bombers, at least if Speer’s Berlin were a reality.