From The National WWII Museum (http://www.nww2m.com/2012/08/brazil-joins-up/):
“In 1942, Brazilian casualties numbered more than 1,000 at sea, all struck by German U-boats. Though the government under dictatorial President Getúlio Vargas sought neutrality—largely to avoid losing business with the powers on either side of the conflict—the people of Brazil largely commiserated with the Allied cause. On 22 August 1942, 79 years ago today, the nation of Brazil declared war on the Axis powers of Germany and Italy”. 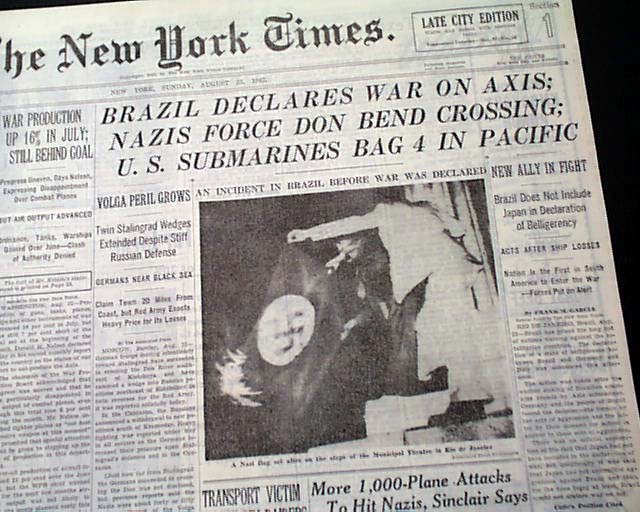 Here are some State Department telegrams regarding Brazil’s entry into the war:

The Brazilian Ambassador to the Secretary of State

Mr. Secretary of State:
Under instructions of my Government, and in accordance with the procedure adopted and the undertakings assumed in the Pan American Conferences of Buenos Aires and Lima, as well as in the meetings of Foreign Ministers, I have the honor to inform Your Excellency that, on the night; of the fifteenth to sixteenth of the present month, there were torpedoed, twenty miles off the coast of Sergipe, five Brazilian passenger vessels which were plying from one Brazilian port to another carrying, among others, pilgrims on their way to the São Paulo Eucharistic Congress.

I avail myself [etc.]

The Secretary of State to the Chargé in Brazil

The following telegrams have today been sent:

I have been informed that the United States of Brazil has today recognized that a state of war exists between Brazil on the one hand and Germany and Italy on the other hand.

On behalf of the Government and people of the United States I express to Your Excellency the profound emotion with which this courageous action has been received in this country. This solemn decision more firmly aligns the people of Brazil with the free peoples of the world in a relentless struggle against the lawless and predatory Axis powers. It adds power and strength, moral and material, to the armies of liberty. As brothers in arms, our soldiers and sailors will write a new page in the history of friendship, confidence, and cooperation which has marked since the earliest days of independence relations between your country and mine.

The action taken today by your Government has hastened the coming of the inevitable victory of freedom over oppression, of Christian religion over the forces of evil and darkness.

I send you my warmest personal regards and expressions of the fullest confidence in the success of our common cause.

I have received a note from the Brazilian Ambassador in Washington informing me that the Government of Brazil recognizes that a state of war exists between Brazil on the one hand and Germany and Italy on the other hand.

The people of the United States welcome the people of Brazil as brothers in arms and salute their high resolve and defiant courage in taking a position unequivocally at the side of the embattled freedom-loving nations of the world. Today a heavy blow has been dealt the Axis Powers, moral no less than military, when a great, peaceful and law-abiding nation is driven by unprovoked acts of ruthless barbarity to take up arms in self-defense. It comes as no surprise to my countrymen that the proud Brazilian Nation has chosen the risks and hardships of battle when confronted with wanton attacks on its sovereign dignity and rights.

The action of the Axis powers in attacking your great country and people is a further demonstration of the fact that those Powers will strike at any peace-loving nation as and when to do so will serve their purpose of world conquest, regardless of considerations of humanity and international law. It also brings into bold relief the basic principle upon which the solidarity of the American republics rests, namely, that an attack against any one of them is an attack against all of them. Each of the twenty-one American Republics are today equally in danger.

Together our two countries will face the future with serene confidence and high hearts.

I take pleasure in sending Your Excellency renewed assurances of my high personal esteem.