Royal Navy submarine HMS Cachalot , a Grampus class minelaying submarine , after laying a minefield on Bay of Biscay , encountered German submarine U-51 (damaged due to enounter with a RAF Coastal Command aircraft the day before , returning back newly costructed U-Boat bases in France) on surface , torpedoed and sunk German U-Boat. There had been no survivors from U-51. 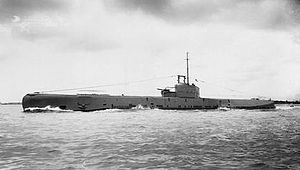