Nominations made for Oscars

Hollywood, California (UP) –
Film stars of well-established reputation won precedence over Hollywood’s newcomers today in the list of nominations for the motion picture industry’s coveted Oscars.

The nominations were announced last night by the Academy of Motion Picture Arts and Sciences, and balloting will begin Feb. 13 in the Academy’s 15th annual presentation of awards for film merit. Awards for acting, directing, writing, photography and technical excellence will be made March 4 at the annual Academy dinner.

Nominations included:
For best performance by an actor:

The best performance by an actress:

Films from among which one will be chosen as best of the year are:

The 15th Academy Awards will honor the best in film for 1942. The ceremony (with comedian Bob Hope once again as the host) will be held on March 4, in the Cocoanut Grove at The Ambassador Hotel in Los Angeles.

The nominations are listed below: 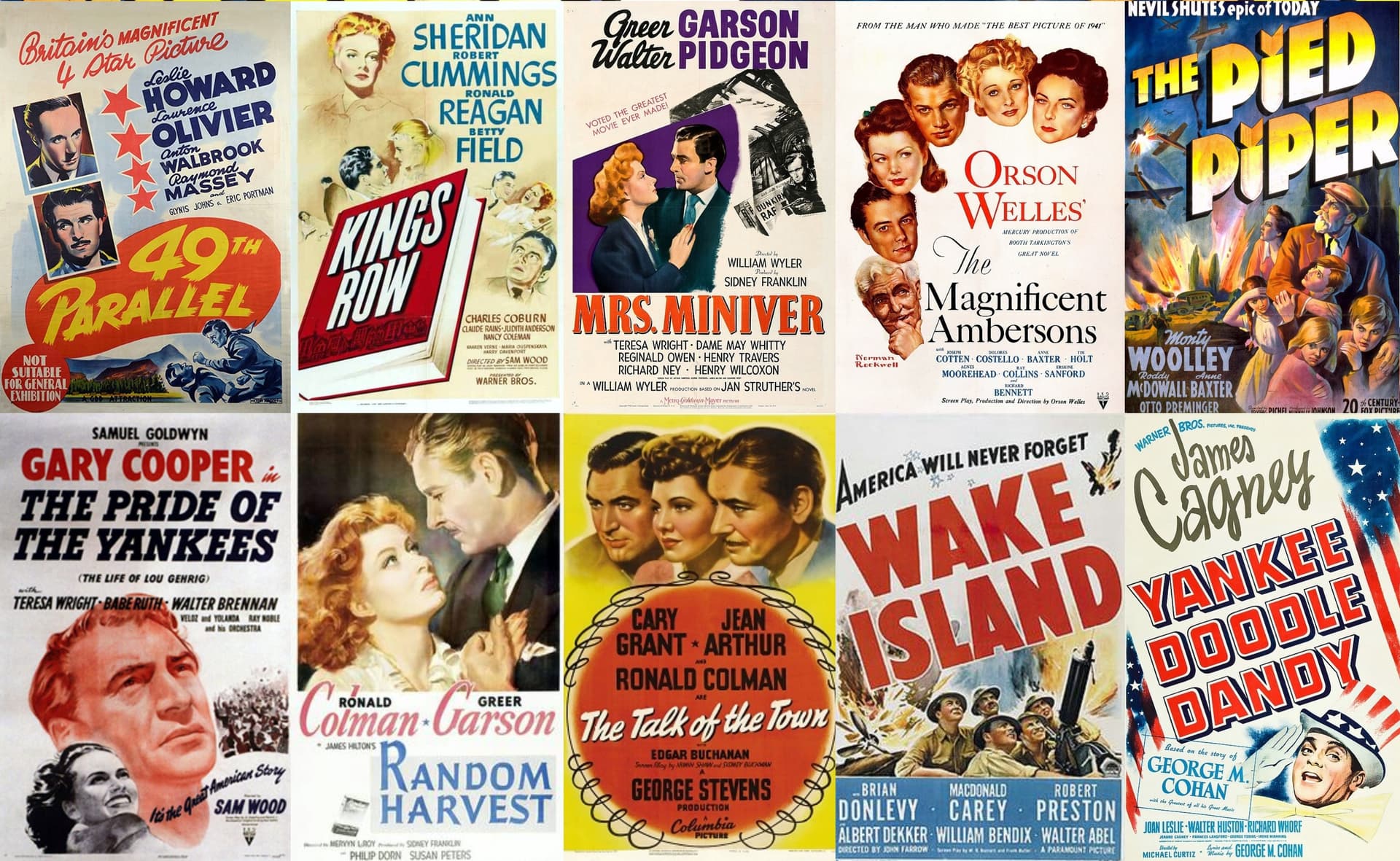 Best Scoring of a Dramatic or Comedy Picture

Best Scoring of a Musical Picture

Woman of the Year – Michael Kanin and Ring Lardner Jr.

Speaking of Animals and Their Families – Paramount

Beyond the Line of Duty – Warner Bros.

Best Scoring of a Dramatic Picture

Best Scoring of a Musical Picture

This Above All – Richard Day, Joseph C. Wright, Thomas Little

The Pride of the Yankees – Daniel Mandell

…for his progressive cultural achievement in establishing the French Research Foundation in Los Angeles as a source of reference for the Hollywood Motion Picture Industry.

…for his outstanding production achievement in In Which We Serve.

…for its achievement in representing the American Way of Life in the production of the Andy Hardy series of films. 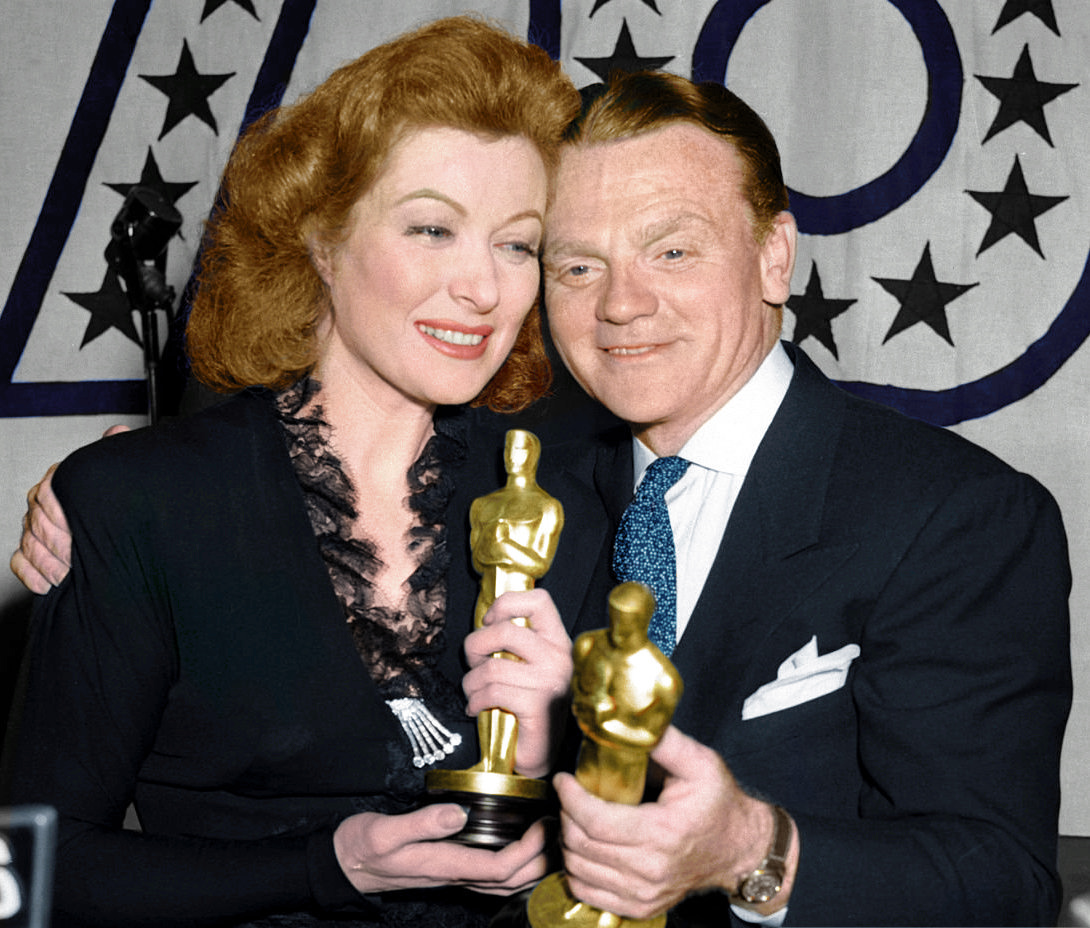 Hollywood, California –
A weeping Greer Garson, triumphant on her fourth try, walked off early today with the Motion Picture Academy’s imitation-gold statuette symbolic of her rise to first place among Hollywood’s movie actresses.

I feel – yes, I feel just like Alice in Wonderland.

…as last year’s Academy winner, Joan Fontaine, handed her the coveted statuette, made this year of plastic and painted gold-colored.

Miss Garson received the prize while 1,300 moviemakers bumped elbows in their applause for her role in Mrs. Miniver, a picture which won most of the other Oscars standing on the table in the Ambassador Hotel’s Cocoanut Grove.

The film itself was judged best of 1942. William Wyler, now with the U.S. Air Force in Europe, received the prize for directing it, while Teresa Wright, who played in support of Miss Garson, took the best secondary actress plum. The photographer and the writers of Mrs. Miniver also won awards.

Only non-Miniver prizewinners among the top-notchers were James Cagney, named best actor for his work in Yankee Doodle Dandy, and Van Heflin, who got the statue as best supporting actor for his role in Johnny Eager.

Miss Garson, who’d worked all day before Metro-Goldwyn-Mayer’s cameras, arrived late at the banquet in a low-cut black evening gown. When Miss Fontaine, wearing the same pink gown in which she won the prize last year, announced the winner, Miss G. planted a kiss on her lips, wept silently for a moment and cried:

This is the most wonderful thing that ever happened to me. If I ever win another Oscar, it will not be the same.

Cagney, who won his statue for his work emulating George M. Cohan as a song and dance man, didn’t weep. But when Gary Cooper handed him the prize, he grabbed the latter’s hand and cried:

The dinner established a record for length in the 15 years of Academy banqueting. Guests, jammed into the room so tightly they would hardly eat their food, started with their shrimp cocktails at 8, and were worrying with their squab and wild rice at 10 p.m. when Academy President Walter Wagner opened the proceedings with presentation of a flag indicating that 27,677 men from the movie industry are in the armed services.

Then came messages from President Roosevelt, Madame Chiang Kai-shek, Secretary of the Navy Frank Knox, Secretary of the Treasury Henry Morgenthau, and others. There were speeches by numerous dignitaries and along about 11 p.m. when the customers were eating the ice cream on the $11 blue plate special, Bob Hope started the giving away of prizes.

He said he was glad so many men from the picture industry had joined the Army, but that he feared what might happen next if more young men get into the service.

Can you imagine Hedy Lamarr waiting to be kissed while Lewis Stone looks for a place to plug in his heating pad?

Then he and others started issuing the prizes for numerous technical and artistic triumphs in the films. Walt Disney got a statuette for Der Fuehrer’s Face, one-reeler hit of 1942.

Irving Berlin issued himself a statuette for his song “I’m Dreaming of a White Christmas.” He said:

The man who won that prize is a good kid. And he deserves it.

Then came more speeches by representatives of Great Britain, Australia and Russia.

The room was full of smoke, the champagne bottles were empty and the bogus palm trees were drooping when Cagney came up, holding onto Cooper, and finally at 1 a.m., Miss Garson rose to get the most coveted award.

After half a dozen false starts and dabbling at her eyes, she made a speech. She said:

I can hardly believe all this is happening to me. I don’t suppose there is a single person who would not like to have such an award. I came here a stranger five years ago, now I’m in love with everybody I have worked with.