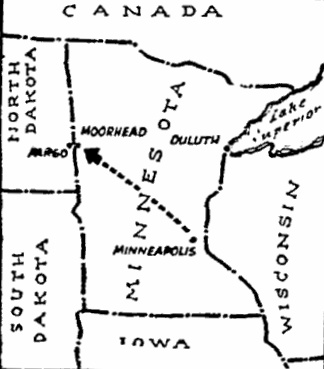 Moorhead, Minn. Oct. 30 (UP) –
Fourteen persons were killed early today when a Northwest Airlines transport plane, landing in the dark on a flat Minnesota prairie, struck a ravine and burst into flames.

Only pilot Clarence Bates, of Minneapolis, escaped with his life and he suffered severely from shock.

There were no witnesses, but airline officials and police agreed that the plane was gliding to the field for a landing when it hit the coulee, which is about 50 feet wide, 35 feet deep and extends across the otherwise unbroken land for about 100 yards.

The dead were 12 passengers, the copilot and a stewardess. The pilots escaped from the flames, either because he was able to crawl through an emergency exit or because he was thrown clear of the wreckage.

All bodies had been removed from the wreckage weight hours after the accident, but the only ones identified immediately were E. A. King, of Fargo, ND, stewardess Bernice Blowers, Mrs. Helen Ford and Aiden Onsgard, the copilot.

Fred Novinger, chief of the third region air carrier branch of the Civil Aeronautics Authority, said after several hours investigation that he had been unable to determine the cause of the crash.

After the bodies were removed from the plane, it was roped pff to preven t the curious dfrom disturbing anhy evidence which might explain the accident.

Airline officials could not twell immediaterl;y if the pilot was making a forced landing on the field or if he mistook it for the Fargo Airport, where he was scheduled to land, three miles away.

Dave Evans, airport manager, said pilot Bates had notified him by radio six minutes before the crash that he was coming into the airport guided by instruments and that “everything was all right.” The plane was en route from Minneapolis to Seattle.

Except for one motor which was thrown loose, the plane remained intact. Flames enveloped iot and destroyed the cabin. If any of the passengers ofr crews escaped death in the crash, they died in the flames which trapped them.

The plane was close enough to the safety of the airport for airport attendants to see the flames after the crash.

There were wheelmarks of the plane across the ravine from the smouldering wreckage, indicating that the landing probably would have been successful if it had not been for the deep coulee.

Clay County Attorney James Garrity said the plane apparently plunged across the coulee and “pancaked” in a mass of fire.

After the crash, the floodlights of the nearby Moorhead Rod and Gun Club were switched on to the field to aid rescuers in the search for the bodies. Only the right wing and the tail of the plane remained unburned when help arrived several minutes after the crash.

A spokesman for the airline in Minneapolis said the weather in the Moorhead area was “all right for operations.”

When authorities reached the scene, pilot Bates was staggering around the plane in a daze. They restrained him from crawling into the burning wreckage.

I want to help get the people out.

From his hospital bed, Bates said he would not make a statement until he had talked with airlione officials.

All I can say is that I was making an instrument approach for a landing at the Fargo Airport.

He said his chest was hurt and that his back was sore. He also received severe lacerations.

Northwest Airlines officials said it was the first fatal crash on their system since Jan. 13, 1939, when four persons died in a crackup near Miles City, Mont.

The following is a list of the victims released by the airline:

Scores of military and private planes have crashed this year, but the Northwest Airlines accident at Moorhead, Minn., today was the worst in the United States since Aug. 31, 1940, when a Pennsylvania Central Airlines plane fell in a thunderstorm near Lovettsville, Va., and 25 persons were killed, including Senator Ernest Lundeen of Minnesota.

The worst previous airplane accident this year was the crash of a Navy bomber on Mother Grundy Peak, near San Diego, Cal., last Jan. 4. Eleven Navy fliers were killed or burned to death.

A bigger crash, though not in the United States, occurred at Armstrong, Ontario, last Feb. 6, when a Trans-Canada Airlines plane fell and killed 12 persons.

Rep. William D. Byron (D-MD) and seven others were killed on Feb. 27, and eight were injured, including Captain Edward V. Rickenbacker, president of Eastern Airlines, in the crash of an Eastern Airlines plane near Atlanta, Ga.

Ten men were killed on April 7 when a Navy patrol bomber crashed in the sea off the Virginia Coast. It was not determined why it crashed, because there were no survivors.

Other accidents this year in which five or more were killed include:

In addition to the Virginia crash, there were two other major air disasters in 1940 – on Nov. 4 when a United Airlines plane rammed a Utah mountain in a snowstorm, killing 10, and on June 17, when two Army bombers locked wings over a New York suburb and crashed, killing 11 men.

Minneapolis, Minn., Oct. 30 –
The crash of the Douglas airliner near Moorhead, Minn., with the loss of 14 lives today was the first fatal accident on Northwest Airlines in more than 100 million passenger miles.

Last April, the airline was given the aviation safety award by the National Safety Council for having operated 94,903,998 passenger miles up to Jan. 1 without a passenger or crew fatality.

The airline was 15 years old this month.