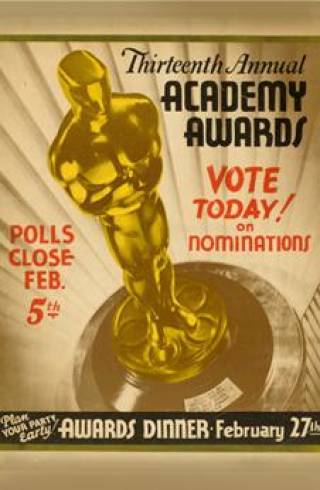 The 13th Academy Awards honors the best in film for 1940. The ceremony (with comedian Bob Hope as the host as he was in last year’s ceremonies) will be held on February 27, at Biltmore Bowl, Biltmore Hotel in Los Angeles.

The nominations are listed below: 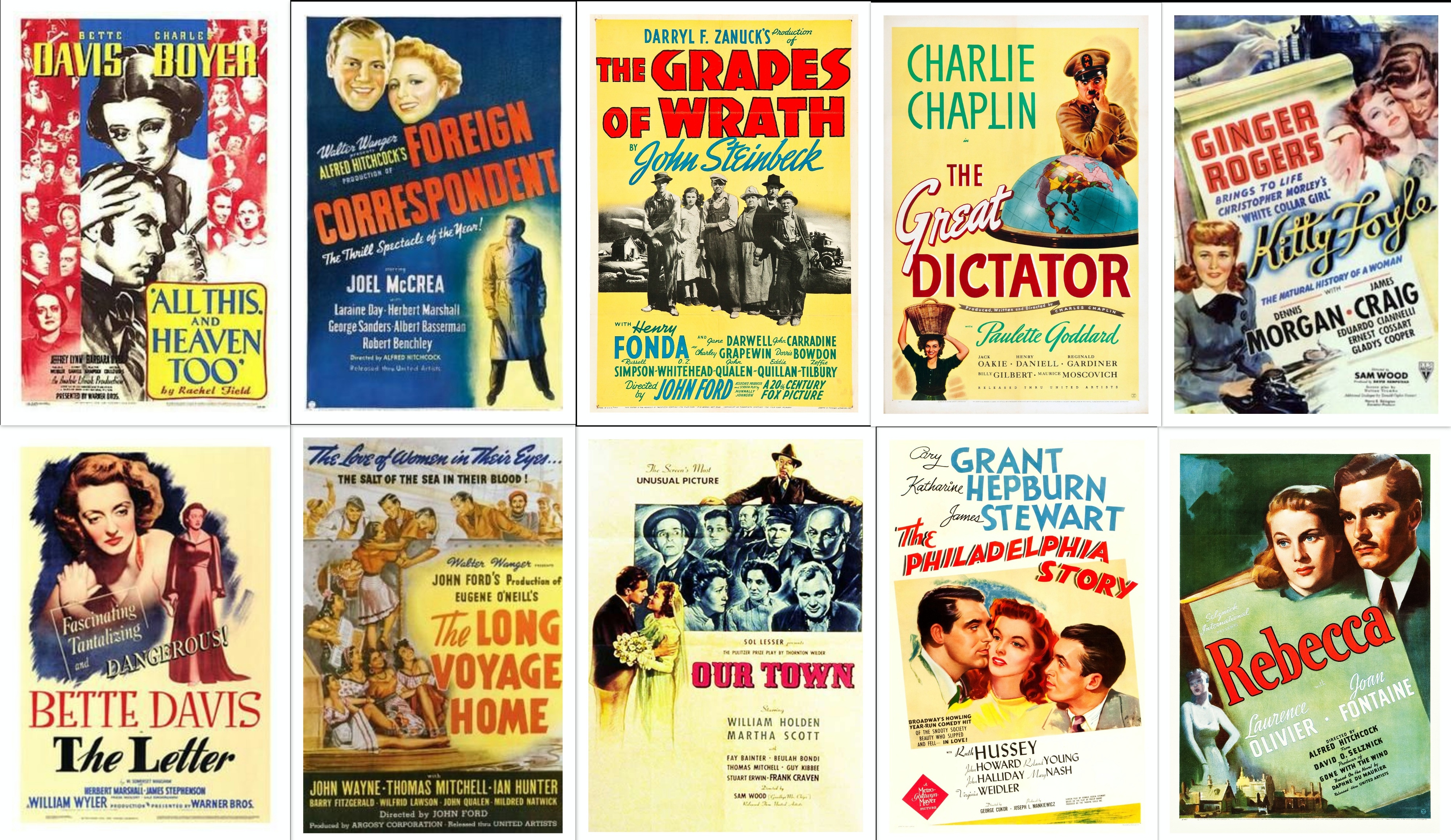 But neither those two stars, nor any of their fellows, will know until late tonight who gets the annual awards of the Academy of Motion Picture Arts and Sciences.

They will be announced only seconds before presentation. And so Hollywood, for a change, is more or less breathlessly anticipating the event.

This 13th annual party will be different, the Academy assures one and all. Heretofore the element of surprise in the banquet hall has been confined to the salad (Tomato surprise, which looks like tomato salad, is a must at these dinners).

For 12 years, the names of the winners have been officially whispered early in the evening, to tip off the winners so they’d be present.

Not all of the nominees will be present tonight. Joan Fontaine, nominated for Rebecca, practically conceded victory to any of the other four girls when she said that because she is working very hard she will go to bed early tonight.

Bette Davis, named for The Letter, Ginger Rogers, for Kitty Foyle, and Martha Scott, for Our Town, will be among the diners. Katharine Hepburn, chosen because of her work in The Philadelphia Story, is in the East.

Two of the five men nominated will not be present. Laurence Olivier (Rebecca) is in England and Raymond Massey (Abe Lincoln in Illinois) is in New York. James Stewart (The Philadelphia Story) and Henry Fonda (The Grapes of Wrath) have reservations. A question mark was written after the name of Charlie Chaplin, selected because of The Great Dictator. He’s in town.

The Academy said its streamlined program would see the first Oscar – as the gold plated statues are so unfittingly dubbed – distributed at 10 p.m. (PST) and the last two, to actress and actor, by 11:18 p.m.

Princeton, N.J. –
Boom Town, a picture of oil wildcatters starring Spencer Tracy, Clark Gable, Claudette Colbert and Hedy Lamarr, has been voted the best-liked motion picture of 1940 by the movie-going public in a survey conducted from coast to coast by the American Institute of Public Opinion.

Knute Rockne, a film depicting the life of the famous football coach, received the second highest number of voters, and Rebecca third.

Today in Los Angeles, the Academy of Motion Picture Arts and Sciences will make its award for the picture considered best in 1940 by the 12,000 or more workers in the motion picture industry. Today’s institute survey is not confined to a special group, but shows how the movie-going public generally – Mr. and Mrs. John Citizen whose nickels and dimes keep the motion picture industry going – would make the Academy Award if they had the say.

The survey was confined to pictures released between Jan. 1 and Nov. 30, 1940. Respondents were shown a list of more than 100 top-grossing pictures for that period, and asked the question:

Are there any pictures here which you especially liked?

The study covered two distinct types of movie fans – the “frequent” theater-goers (once a week or more), and the “infrequent” movie-goers (less than once a week). Hollywood producers are beginning to take increased interest in the “infrequent” movie-goers – the discriminating, critical and sometimes disgruntled abstainers – because their patronage and support is so desperately needed at this time when the industry’s European revenues, formerly about one-fourth of total income, have been cut off.

The contrast between the movie tastes of the frequent and the infrequent moviegoers is shown below:

Rebecca thus earns the distinction of being the picture which attracted the most abstainers.

The pictures selected by the public as the best, are, with one exception, the pictures which were most successful at the box-office. The exception is Knute Rockne which, although 2nd in the Institute’s survey, was not among the top leaders in terms of box-office receipts.

The pictures released after Nov. 30, 1940, were not included in the survey because they had not had time to reach audiences throughout the country. This ruled out three films which have been nominated for the Academy Award – The Great Dictator, Kitty Foyle and The Philadelphia Story, and another picture which has been popular since its December release, Northwest Mounted Police.

It is interesting to note that of the six pictures selected by the public, only one, Rebecca, is to be found among the 10 nominated for the final consideration in the Academy Award contest. Apparently, there is considerable difference of opinion between Hollywood and its customers.

The 10 pictures nominated for the Academy Award by the industry itself are All This, and Heaven Too, Foreign Correspondent, Kitty Foyle, The Grapes of Wrath, Our Town, Rebecca, The Great Dictator, The Letter, The Long Voyage Home and The Philadelphia Story.

Considerable variation was found in the survey between the choices of men and of women. All This, and Heaven Too, for example, ranks 2nd with women, 39th with men. My Favorite Wife finished in 4th place among women, but only 34th with men. Knute Rockne and The Fighting 69th were, on the other hand, more popular with men than with women.

Of the public’s six top choices, three pictures were made by Metro-Goldwyn-Mayer (Boom Town, Northwest Passage and Strike Up the Band), two by Warner Brothers (Knute Rockne and The Fighting 69th) and one by David Selznick (Rebecca).

Spencer Tracy holds the distinction of starring in two of the public’s six leading choices. He was the pugnacious and long-suffering wildcatter in Boom Town, and the redoubtable leader of Rogers Rangers in Northwest Passage.

Best Screenplay
The Philadelphia Story – Donald Ogden Stewart, based on the play by Philip Barry

Best Original Song
“When You Wish Upon a Star” from Pinocchio – Music by Leigh Harline; Lyrics by Ned Washington

They’re king and queen of movies 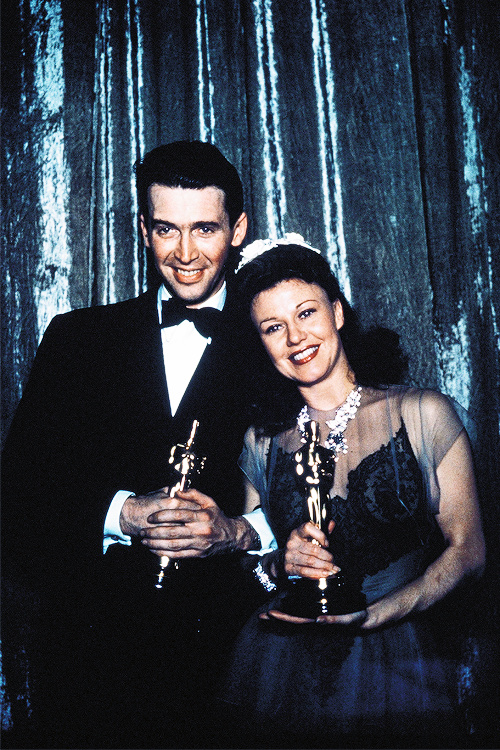 Hollywood, Feb. 28 (AP) –
A nimble-footed Charleston dancer turned dramatic and a lank actor Hollywood once kept buried like a case ace are the new queen and king of the movies.

Ginger Rogers and James Stewart are their names. They are the newest winners of the awards signifying best given by the Academy of Motion Picture Arts and Sciences.

Ginger was better than any of her acting sisters in 1940, her fellows believe, because of her portrayal in Kitty Foyle.

And Stewart impressed them by his work in The Philadelphia Story.

They, as well as a score of others, were called to the podium of a banquet hall jammed with celebrities and fellow workers last night to be handed statuettes a foot high which have been dubbed Oscars.

Rebecca was the year’s best motion picture, in the opinion of the Academy’s 12,000 voters. 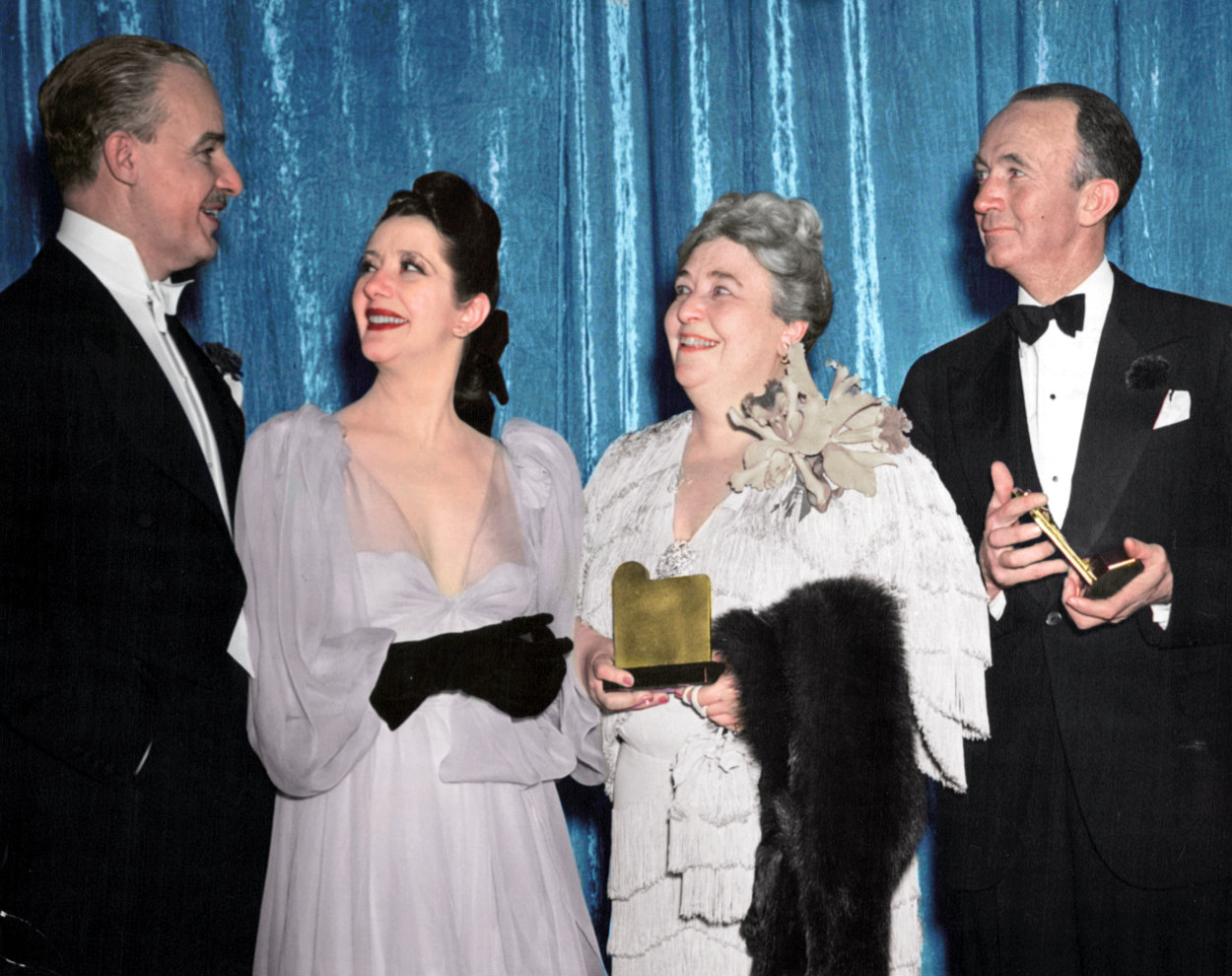 The award for the best performance by a supporting actor went to Walter Brennan, who played Judge Bean in The Westerner. It was old stuff for him – he won in 1936 for Come and Get It and in 1938 for Kentucky.

Jane Darwell was voted the best supporting actress for her characterization of Ma Joad in The Grapes of Wrath.

The director of The Grapes of Wrath, John Ford, won the directorial award. He also won in 1935 for The Informer.

This, the 13th annual awards party, was highlighted by a radio address by President Roosevelt from the White House directed to the motion picture industry. He said he wanted to place emphasis “on the service you can render in promoting solidarity among all the peoples of the Americas” and thanked the industry for its support of the defense program.

Miss Rogers, who was a song and dance girl during her early movie days, has taken slow but certain steps toward the histrionic heights she reached in Kitty Foyle. Becoming a dramatic star was no cinch, either. She is known as one of the hardest workers in town and shwe has little time for play. Her real name is Virginia McMath and she was born in Independence, Mo., 30 years ago come next July, but she was reared in Fort Worth, Tex.

Under contract for months to MGM studio, Stewart wandered around the lot hoping he;d impress some director. He impressed them – but not in the right way.

They thought he was too lanky, that his face was too long, that his lower lip was too prominent. But, in one small role, he clicked and his personality has been registering since. The ace came up.

The red-haired and vivacious Ginger was competing against some of the movies’ best talent, including Bette Davis, who has won two awards, and Katharine Hepburn, a one-time winner. Bette was nominated for The Letter and Hepburn for The Philadelphia Story. Also named were Martha Scott for Our Town and Joan Fontaine for Rebecca.