Operation Josephine B (or Operation Josephine) was a military mission in June 1941 during the Second World War. The mission was organised jointly by the Free French and the British Special Operations Executive (SOE), together with the RAF (Royal Air Force) for air drops. The operation was initially stalled by a lack of up-to-date information, but ultimately succeeded in its main objective, the destruction of an electrical transformer station in Pessac, near Bordeaux crippling Axis submarine bases operations nearby.

Six of the eight transformers were destroyed, resulting in the Italian submarine base at Bordeaux being hampered for weeks and a variety of other problems for the Italian and German occupiers. The operation was SOE’s first success in occupied France and it considerably enhanced the organisation’s standing.

The SOE then turned to its Free French (or RF) section. Sergeant J. Forman, Sub-Lieutenant Raymond Cabard and Sub-Lieutenant André Varnier (aka Jacques Leblanc) were briefed for the operation. Forman had recently returned from Operation Savanna, the first attempt to insert SOE trained Free French paratroops into German-occupied France. That mission had failed leaving behind some of the agents including Joël Letac who had then travelled to Paris. The sabotage team were sent to SOE’s Station XVII for training in industrial sabotage by Cecil Vandepeer Clarke.

The sabotage team was parachuted into France on the night of 11/12 May; the night was a full moon. They hid their container of equipment and reconnoitred their target. They were dismayed to discover a high tension wire just inside the top of the 9-foot-high (2.7 m) perimeter wall and the sound of people moving about inside. They also failed to obtain bicycles on which they had planned to make a silent get-away. Discouraged, they lost heart and gave up.

The team missed their 20 May rendezvous with the submarine sent to retrieve them and so set out for Paris. Forman had been given a couple of possible addresses before he left England; at one of these he met Joël Letac. Letac had been forced to abandon Operation Savanna, but he would not hear of giving up on Josephine B. Letac rallied the team and travelled with them back to the Bordeaux region.

In the night they seized a truck to go up to Pessac; the truck broke down, so they resorted to bicycles. They quickly found their explosives where they had hidden them on the first night: in ferns a hundred metres from the transformer station. Varner quickly verified that the detonators would still work in spite of the moisture.

On the night of 7/8 June 1941, Forman climbed the perimeter wall and jumped down into the yard while carefully avoiding any contact with the high voltage cable. Then he simply opened the door to his comrades who brought in all their equipment. In less than half an hour plastic explosive contained in boxes and connected to magnetic incendiary bombs was placed on each of the eight main transformers. The four men made their get-away, pedalling with all their might, as explosions sounded and flames rose into the sky. Searchlights vainly probed the sky for bombers.

The team asked for evacuation by Lysander light aircraft. (which SOE used frequently for agent drop and pick up) This was not provided and instead they were ordered to return to England via Spain.

The sabotage team made for Spain at a leisurely pace; they spent a quarter of a million francs (about £1,400 in 1941 roughly equivalent to £70,000 in 2020 over a period of two months and “…left a trail of broken glass, if not hearts, behind them”. Cabard was arrested just before they crossed the Pyrenees. The other three made it back to England during August. Cabard later escaped and was back with SOE by November.

Six of the eight transformers were destroyed. It was assumed that the explosives on two of the transformers must have slipped off – they were all very wet. Work in the Bordeaux submarine base and in numerous factories was held up for weeks. The all-electric trains from south-western France had to be withdrawn and replaced with steam locomotives. 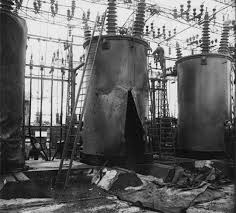 All the spare transformer oil in France was needed to effect repairs, and these were not completed for a whole year.

The commune of Pessac was fined one million francs, 250 local people were imprisoned and a curfew was imposed from 9:30 pm to 5 am.

Twelve German soldiers were sentenced to death and shot for failing to protect the station against the saboteurs.

News of the attack reached Britain on 19 June. Hugh Dalton, then Minister for Economic Warfare passed the news to Churchill on the 25 June; Dalton wrote: “We may therefore take it as practically certain that three [sic] men, dropped from an aeroplane, have succeeded in destroying an important industrial target … This strongly suggests that many industrial targets, especially if they cover only a very small area, are more effectively attacked by SOE methods than by air bombardment.” This was SOE’s first operational success in occupied France and it considerably enhanced the organisation’s standing