Here the front page of the newspaper I have here at home… 10 May 1940.
Translation in English below. 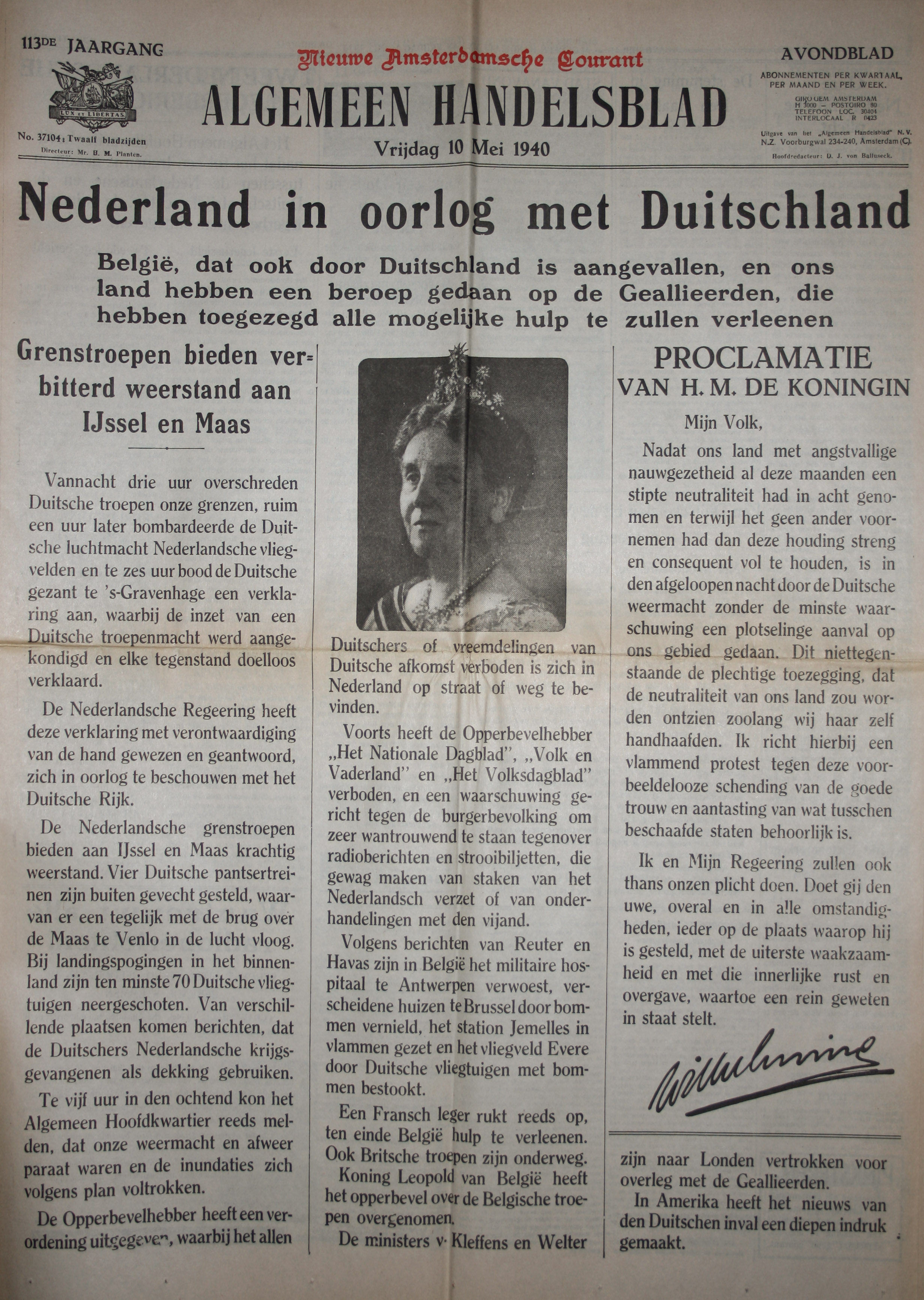 Belgium, also attacked by Germany, and our country made an appeal to the Allies, who committed to offer all possible help.

Tonight at three o’clock German troops crossed our borders, more than an hour later the German Wehrmacht bombed Dutch airports and at six o’clock the German ambassador in The Hague offered a statement, which announced the deployment of German troops and declared any resistance pointless.

The Dutch government rejected this statement with indignation, and responded to consider itself at war with the German empire.

The Dutch border troops offer powerful resistance at the IJssel and Maas.

Four German armored trains have been put out of action, of which one was blown up simultaneously with the bridge across the Maas at Venlo.

During landing attempts in the midlands at least 70 German airplanes were shot down.
Messages were received from multiple sources, stating that the Germans use Dutch prisoners of war as living shields.

At five o’clock in the morning General Headquarters could already report that our military forces and resistance were ready and that the inundations were executed according to plan.

The Commander in Chief issued an order, which prohibits Germans or foreigners of German descent to enter the Dutch roads.

Furthermore, the Commander in Chief has prohibited the newspapers “Het Nationale Dagblad”, “Volk en Vaderland”, and “Het Volksdagblad”, and directed a warning to the civilian population, to be very distrustful of radio broadcasts and leaflets which promote the cessation of Dutch resistance or negotiations with the enemy.

According to reports of Reuter and Havas, in Belgium the Military Hospital of Antwerp has been destroyed, multiple houses destroyed by bombs in Brussels, the train station Jemelles set afire, and the airport Evere bombarded by German airplanes.

A French army is already advancing to come to Belgium’s aid. British troops are also under way.
King Leopold of Belgium has taken over the supreme command over the Belgian troops.
The ministers Van Kleffens and Welter have travelled to London for consultation with the Allies.
In America, the news of the German invasion made a deep impression.

Proclamation of Her Majesty The Queen

After our country meticulously adhered to a strict neutrality for all these months, and while it had no other intention than to maintain this attitude strictly and consistently, the German Wehrmacht attacked our territory without even the slightest warning.

This, notwithstanding the solemn commitment that our country’s neutrality would be spared as long as we maintained it ourselves.

I aim a fiery protest against this unparalleled violation of good faith, and against the corrosion of what is decent between civilised states.

I and My Government shall do our duty also at this moment. You do yours, anywhere and in any circumstance, each at their own place, with the utmost vigilance and with the inner calm and surrender which a clear conscience can enable.

No it didn’t mention Luxembourg.
If your country is suddenly at war chances are that news about another country is less important, especially if it doesn’t border to yours, and chances are that the frontpage is mainly about the fact that your nation has been vandalised.

The news about war breaking out in your own country is more relevant than showing readers how knowledgeable you are about the full scope of the war.
That kind of image building could only be afforded after the war was ended (on the internet for example), not in an emergency situation like this.

Sorry, I didn’t mean to be rude. The whole “Mention Luxembourg” thing has become such a meme in the community that when you showed this newspaper about the invasion of the Benelux countries that only talked about the larger two, I couldn’t help but make the joke. I understand that a lot of fear & confusion was going on in those first four days of the war for the Netherlands that mentioning Luxembourg was not a high priority. Thank you for sharing this piece of your country’s history! It really is fascinating to read primary accounts of events as they are transpiring & I’d love to see more! Again, sorry about the joke & welcome to the forums!

Great article @merlijnvv, we’re not quite there yet, but May and June are going to be very interesting. I wonder how the Dutch felt when the Germans attacked, having managed to stay neutral during The Great War. There has not been a war on European Dutch soil since the Napoleonic wars (not counting the Belgian revolution).

My history teacher has this article hanging in his classroom, very interesting!