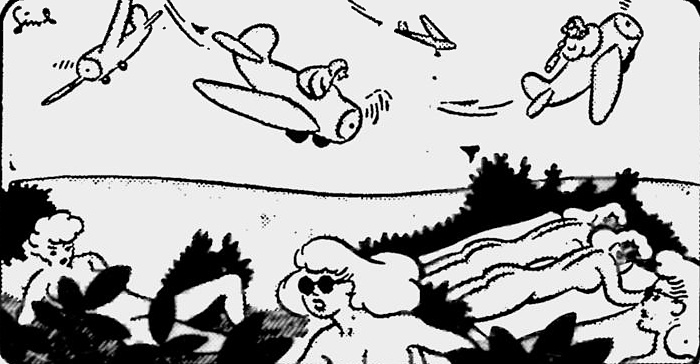 Fifteen pilots may lose their licenses for suddenly losing altitude over a sunbathing club near Zelienople.

Complaints have been filed against them with the Civil Aeronautics Authority at Washington, charging that they deliberately dived low for a glimpse at some 20 men and women absorbing the healthful rays of the sun without the hindrance of clothing.

The spot where they spotted the Vitamin D devotees was the Halcyon Farm, on Route 528 three miles north of Evans City, which neighbors described as a colony of nudists.

But Mrs. H. C. Lawson, wife of the caretaker, declared:

I wouldn’t exactly call it a nudist camp. I’d call it a summer club for sunbathers.

The alleged violations of the law forbidding airplanes to fly lower than 500 feet occurred two weeks ago, when an instructors from the Butler Airport was aloft with a student.

As part of his training, the student was outlining on a map the grassy meadows in the vicinity which could be used for emergency landings.

Look at the people in swimming down there!

The pilot, more accustomed to viewing sights from the air, also looked, and also exclaimed:

If they’re in swimming, where are their bathing suits?

The lesson was cut abruptly and the planes streaked for the airport. The word was whispered among the other fliers.

The other pilots dashed for their planes.

There was a mass takeoff to see the takeoff.

Soon there were a dozen or more planes, in various formations, circling over the Halcyon Farm as though an air raid were on and it was the enemy objective.

Instead of halcyon, which means calm and peaceful, the air over the farm was bedlam.

There is no evidence to indicate whether five RAF pilots, then stationed at Butler Airport for special training, were among the pilots.

One flier is reported to have dived over the tree tops to where three girls were lying face downward. Just then his motor shut off and he yelled:

The motor did turn over again in time to save him from a crash.

Another pilot is supposed to have cleaned up handsomely ferrying passengers over the camp on quick, five-minute trips.

Among the passengers were many who lugged their cameras with them.

At first, according to reports, the sunbathers paid no attention to the planes, but when the dive “bombing” continued, they started running for cover.

Mer. Lawson, who is caretaker of the camp in his spare time when he is not on duty as a Pittsburgh taxi driver, went to the Butler Airport and lodged a formal protest.

The law specifies that any plane which flies so low that people on the ground can read the ship’s numbers is flying too near the ground for safety.

Mr. Lawson, according to reports reaching the pilots, supplied quite a few numbers.

Halcyon Farm is located in a deep ravine, the sides of which are so thick with trees and bushes that vision beyond a few yards is impossible.

The lonely lane leading down to the camp is protected by everything short of a watchdog.

There is a lock on the gate, barbed wire, and three signs warning against trespassing.

The entire layout is surrounded by barbed wire, and there are “no trespassing” signs posted almost every 50 feet.

On ther grounds are the clubhouse, the home of Mr. and Mrs. Lawson, a badminton court and a swimming pool made by damming a small creek.

This is the first year that the camp has operated.

This is an outdoor summer camp for ill people. Its purpose is to provide sunbathing for people with such things as skin disease and neuritis.

You wear halter and shorts, but then there is a place secluded if you want to sunbathe without them.

However, men and women are separated.

The caretaker’s wife said that the clientele was very restricted.

We have a private membership. Some of the people are sent to us by physicians. You have to sign an application, and then the board of governors has to pass on you.

She said there was one requirement of all members:

You have to be ill in some way.

Hilarious…boys being boys and all that nonsense

Well, we boys were kinda like that as well when I was in college…

Just like our navy pilots drawing penises in the sky

“What the dickens is this immoral display doin’ here?”

I do have to say… good thing you were talking about the Navy. If you were in the Army, Gen. Lear would have whooped your ass!

Ahh, that whole modern vs. 40’s eras views on what is and isn’t acceptable in society god bless the US!

No, not just that.

Here’s the incident I was referring to.

The Pittsburgh Press (July 8, 1941) YAHOO! … Soldiers to be penalized for whistling at girls … Memphis, Tenn., July 8 (UP) – 1,200 soldiers discover today the penalty for whistling and “yahooing” at girls in shorts. They were afraid it would turn out to be a 150-mile hike. The soldiers made the mistake of doing their whistling and “yahooing” on the presence of Lt. Gen. Ben Lear, commander of the Second Army. General Lear was playing golf Sunday. On the course nearby was a girl foursome…

The nature of their dressing down not revealed 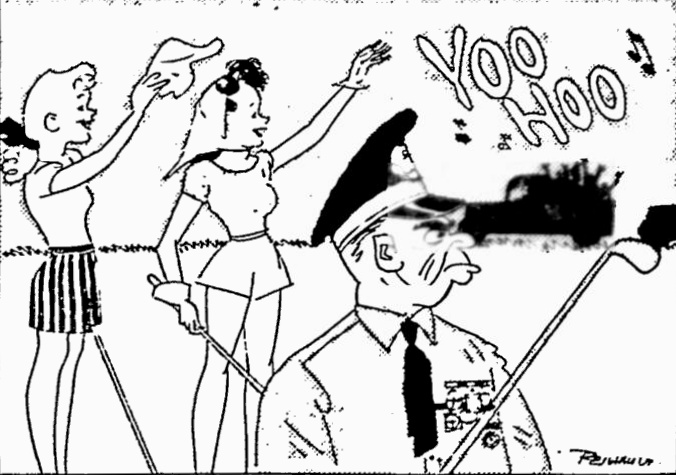 So a golf club to the jewels, ouch

Actually, no. The General punished them by forcing them to walk 15 miles to their base.

As for the girls, they didn’t really mind. I read letters from some women who defended the catcalls.